In the Creative Learning department, we’re used to early starts. After all, school begins at 8.50 and there’s no changing that, even if a musician has to drive 100 miles to get there. But 4.30am on a Sunday morning was a little painful even to us hardened souls, and as the taxi drew up to take me to Heathrow I did begin to wonder what we’d let ourselves in for. 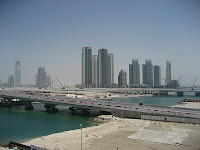 On the other hand, lovely though it is to visit schools around the country, Abu Dhabi did sound a little more glamorous. After all, if they devoted an entire Sex and the City film to the state, there had to be a bit of glitz. And as we pulled up to the Beach Rotana hotel at the other end of a seven hour flight, the team (workshop leader Fraser Trainer, flautist Sarah O’Flynn, violinist Nickie Goldscheider, viola player Kate Musker, and me) realised we would definitely be in for a comfortable, if brief, stay. It might not have been the Emirates Palace (Abu Dhabi’s best, and reputedly the world’s most expensive hotel to build, which apparently has a vending machine selling gold bars in the lobby) but it looked pretty luxurious to us. 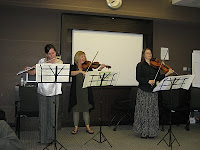 The purpose of our trip to Abu Dhabi was to run a Creativity workshop there. The workshop is part of the Cambridge Judge Business School’s LEAD (Leadership Excellence Applied Diploma) programme that it runs in collaboration with ALDAR, a real estate development company. This programme gives UAE nationals the opportunity to learn from some of Cambridge University’s top academics. Having worked with the Cambridge Judge Business School on several occasions, they invited us to take part in the LEAD programme to explore with the participants how musicians work together and communicate. 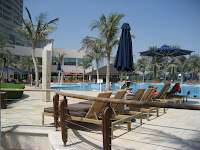 After a swim in the hotel pool on Monday morning (well, in 40 degree heat, we needed to cool down before we could concentrate on planning a workshop) we were whisked off to the training centre of ALDAR Properties, the company responsible for much of the building work in the city, and for hosting the LEAD programme. We were to work with a group of around 20 participants, and the plan was to get them involved in making their own music, using percussion instruments, so that they could experience what it felt like to perform in an ensemble, before watching the Britten Sinfonia trio do the same. We were curious to see whether the group would get involved in the workshop in the same way as our participants in the UK do, given the cultural differences in a strict Muslim country, but absolutely delighted when they took to the activities with great enthusiasm, and quickly got involved in fascinating conversations about the differences and similarities between the music world and the business one. 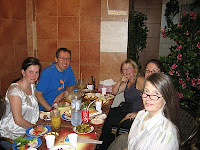 The working day concluded, the team rounded off the trip with a delicious meal at a local restaurant, and then a quick paddle in the (still bath-temperature) sea. We left on Tuesday feeling intrigued by our brief glimpse into Abu Dhabi’s business culture, hopeful that our workshop had left the participants with something new to bring to their working lives…and looking forward to a good night’s sleep.

Except, of course, that with a schools workshop bright and early on Wednesday morning, there wasn’t going to be a lie in for a little while…
Sophie Dunn
Creative Learning Director
Posted by Britten Sinfonia at 15:05 No comments:

On Friday 15th October oboist Nicholas Daniel will give the premiere James MacMillan's new oboe concerto at Birmingham Town Hall before performances at London's Queen Elizabeth Hall, Norwich's Theatre Royal, West Road Concert Hall in Cambridge and Chelmsford's Civic Theatre. Here Nicholas Daniel gives a personnel view of the piece and how it was developed.
Sometimes important new pieces emerge after a long 'courtship' with a composer, sometimes they come out of the blue. With the James MacMillan Oboe Concerto it has been born out of a long, happy and fruitful working relationship and friendship between both James and myself and between the Britten Sinfonia and this great man.
It is quite clear from his writing that in this time he has come to understand my playing profoundly both as conductor and composer, and, very importantly for the new piece, he understands the important relationship between me and my colleagues in of the Britten Sinfonia. This, after all, is the orchestra I am a founder member of, who I adore more than any other, and keep a watchful eye on at all times, and for whom, uniquely, my wind ensemble, Haffner Winds, is the wind section.
Luckily for us the Concerto has come at a time when he seems to have found terrific ease and confidence, and even fun in his music. One instruction in the music is 'laughing', for instance, over a cascade of trilled notes!
I was lucky enough to perform 'The World's Ransoming', part of his massive and impressive Easter work- Triune, for Cor Anglais and large orchestra with Jimmy in my favourite Polish city, Wroclaw, 2 years ago. It was in one of the astounding churches on an island in the city centre where there are several of them- a very special calm and serenity descends on one there.
At one moment in the piece where the Cor Anglais enters on a high D# adorned with what sounds like a glitter of starlight in the percussion and I just remember looking up at Jimmy at that point and being so inspired to see the music so visible in his face that the high D# just floated out exactly as I wanted it to. Its a great gift he has to make it so easy to understand his music just by his manner and physical expression, as well as by what he says.
On that visit to Poland we discussed some general points about the Concerto, and I believe I may have made the slight mistake of asking him not to limit in any way what he wanted to write! I say mistake but I don't mean it, of course, but the piece is really quite hard! Its arguably the most technical concerto in an oboistic sense that has been written since Elliot Carter's. In fact I have found it harder to learn than the Carter.
When I got the music a short while ago it looked to me rather like Nielson's Clarinet Concerto in terms of the Oboe writing, by which I mean flowingly virtuosic and needing an effortlessness to the technique. It also has a very exciting soloistic and supportive role for the wind, brass and timps inside the orchestra. There is no operatic aspect of this in terms of peripatitetic requirements, but the calling across the orchestra of various groups of instruments will be a stand out feature of the work, as is palindromic writing.
The slow movement is a total re-write of a solo Oboe piece Jimmy wrote after the 9/11 atrocity in America, In Angustiis ii. The original piece is desolate, lost, post-nuclear, horrifying, but the concerto to me seems to have more companionship in it and more hope, and maybe more beauty. In a way its hard to write about it because I haven't heard it all yet and haven't put it with the audience, and that changes everything.

I'm finishing this little insight for you on the train on the way to the first rehearsal, and I am so excited and nervous, and honoured to have such a fine, confident piece written for me.

For more information on each of performances click here