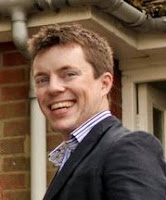 In another post in our occassional series of Q and A's with soloists, musicians and staff our Development Director, Will Harriss answers a few questions. Will is responsible for all our fundraising initatives from individual donors to our friends scheme, corporate sponsorship deals to raising funds towards commissioning new works. Will is also the brainchild behind our Tenner for a Tenor campaign.

What has been the highlight of your career so far?
Raising enough money to fund two different orchestral academies. The second is a work in progress, but seeing it develop as we head towards its launch is totally brilliant.

Any low points?
Any project which can’t happen because of a lack of funds isn’t great. I hope there won’t be too many in my career, as part of fundraising is always to try and have a plan B should the unexpected occur. But there will always be some uncomfortable moments.

What is your greatest fear?
Being trapped inside a small box where no-one can hear me.

What is your earliest musical memory?
Not being able to play a piano piece aged 6 or 7, and having a complete tantrum as a result.

Which living person do you most admire, and why?
Jointly, it’s Bill Gates and Warren Buffett. They’ve really put philanthropy on the map, and I just wish that more people with extreme wealth would follow their lead. Doing something for humanity, such as helping to save lives, enabling great art, or doing something positive for the environment has to be better than acquiring a second yacht.

What would your super power be?
It would have to be invisibility coupled with the ability to fly like superman. I’d use the invisibility to avoid airport queues, although thinking about it I’d probably not need to land at airports.

If you were an animal what would you be?
A polar bear.

What is your favourite book?
An Equal Music, by Vikram Seth.

What is your guiltiest pleasure?
That extra glass of wine. I wouldn’t say no to combining that with a James Bond film. Oh dear.

Who would you invite to your dream dinner party?
Ok, I might start with the Archbishop of York and Barack Obama – as I consistently admire their leadership. Paul Merton and Sandi Toksvig would be fun. I’d like a philanthropist like Bill Gates or Warren Buffett round the table. I might have someone like John Adams to provide a musical perspective on things, and I’d quite happily have Bill Evans on the piano in the corner. Gordon Ramsey can do the food. With that lot, I think I’ll need to take advice on the wine.

If you could go back in time, where would you go?
Probably to the time of the Romans. They were pretty much on top of their game with villa building, city building, and empire building. It certainly puts my house DIY into perspective.

What is the most important lesson life has taught you and in a nutshell what is your philosophy?
Try not to prevaricate – come to a decision and live with it (although for me this is still a work in progress!). Eat well. Laugh lots, especially in the face of adversity. Listen to those around you, whether it’s your family, friends or colleagues – although there’s a definite art to unlocking the right advice at the right time. Be positive rather than negative. Obstacles can nearly always be overcome with a positive approach – or at least approached from a different direction. Don’t ever be afraid to dance – I guarantee you won’t look as bad as me.
Posted by Britten Sinfonia at 12:11 No comments: