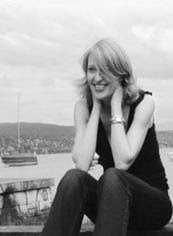 Our Creative Learning Director, Sophie, has been telling me about the final planning stages for one of Britten Sinfonia’s biggest Creative Learning projects this season. SENSE is a collaboration between Britten Sinfonia and Random Dance and the result of almost a year of discussions, workshops and rehearsals. The performances, which will take place on 10 & 11 July, will involve around 100 young people from Ipswich dancing and performing music which they themselves have played a key role in creating.

Back in January, composer Stevie Wishart (in our photo) and BS viola player Bridget Carey began making regular visits to three Ipswich schools – Beacon Hill, Kesgrave and St Joseph’s College. Over the course of a number of weeks, ideas became musical themes, and themes became longer pieces of music. Each school had a unique take on the project: Beacon Hill’s pupils built up a wall of sound using electric guitars and keyboards; Kesgrave’s music technology students recorded and distorted sounds to make pieces of digital music, and St Joseph’s College focused on live performance involving voices and string instruments. Stevie then took all of these elements and wove them together to form a piece – which will form the background to a piece of dance subsequently choreographed by Wayne McGregor and his team at Random Dance.

Having searched throughout Ipswich for a suitable space in which to perform this new piece (last year’s project culminated in a performance in a car park, so we couldn’t revert to traditional theatres!) we finally found Endeavour House. Suffolk County Council’s office building has an amazing glass-walled atrium: a wonderful place for exploring the different dimensions of sound and movement which inspired the piece’s title and content.