The Traveller in Lichfield 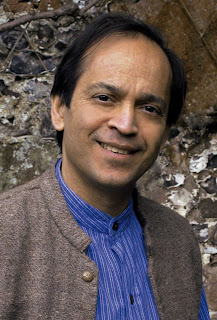 'The literary patchwork was fluently stitched together, and Roth's score, which had both Brittenesque moments, and highly accessible anthem-like choral writing, nicely varied the pace'. So wrote Andrew Clements in today's Guardian of the last of the performances of Alec Roth's The Traveller which we have been giving at the festivals in Salisbury, Chelsea and Lichfield.

For the texts, Vikram Seth wrote six new poems and translated some 25 Indian texts from a rich variety of traditions and languages, including Sanskrit, Pali, Hindi, Urdu, Bengali, and Tamil. Here is an extract:

Child of son, of daughter,
Tombed and wombed in water,
Flesh to bind and bound me,
Darkness all around me,
Neither seen nor seeing,
Being and not being,
In my world's cessation
Lies my re-creation.
© Vikram Seth

Mark Padmore was the tenor soloist, in what was the last concert project of our season. He joins us again in the first tour of next season in October, in an enticing project with Katie Mitchell: Night Music.
Posted by Britten Sinfonia at 09:46