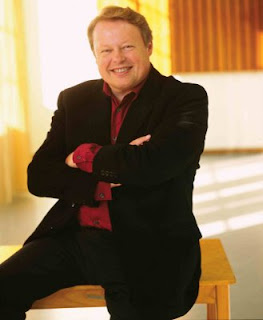 To my college last night for Evensong. Queens' dedicated this service to Richard Hickox, who died at the weekend. Richard was Organ Scholar in 1967-70 and an Honorary Fellow since 1996, until his untimely death at the weekend. Sir David Willcocks directed the choir in a sequence of works by some of the British composers whom Hickox championed: William Harris, Henry Balfour Gardiner and John Tavener. I got to know Richard post-Queens' when his City of London Sinfonia first started doing concert series at the Barbican and I managed the marketing. Richard Morrison's Times article encapsulates his career and Fiona Shaw talks of his work on the ENO production of Vaughan Williams' Riders to the Sea which he was to conduct, opening tonight.
Richard always supported the commitment of orchestras such as ours to young composers, and so, on a happier note, I must remind you that our Britten Sinfonia at Lunch series begins again in Krakow on Sunday, before moving on to Cambridge, London, Birmingham and Norwich. The featured British composers are Colin Matthews and Charlotte Bray.
Posted by Britten Sinfonia at 10:00