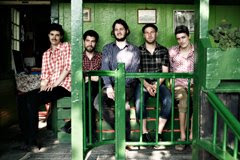 In a Fuseleeds09 exclusive and UK premiere, Britten Sinfonia and Copenhagen-based Efterklang come together to create a unique project, encapsulating the truly eclectic fusion, and pioneering, diverse vision of the festival.

Fuseleeds is a major biennial music festival celebrating the wealth and diversity of today's vibrant new music scene. When the festival launched in 2004 it broke the mould by presenting a programme that encouraged artistic risk-taking across genres through commissions and collaborations presented in new and exciting ways.

Our concert on 25 April at Leeds Academy will include John Woolrich's Stealing a March, Tansy Davies' Hinterland, and three Frank Zappa classics: Be-Bop Tango, Outrage at Valdez and G-Spot Tornado. Then we will present the UK premiere of Efterklang's score to their celebrated 2007 album Parades (The Leaf Label) for band and orchestra. The band will perform their majestic, otherworldly pop songs alongside Britten Sinfonia.

Box office details are here.
Posted by Britten Sinfonia at 09:09