Our Creative Learning intern, Hannah Ellis, reflects on her time (so far!) at Britten Sinfonia: 'With The Apprentice’s latest reject, Majid, having been pulled apart in the boardroom and sent packing, it got me thinking – which is better, a day in the life of an Apprentice contestant with Sir Alan Sugar or a day in the life of a Creative Learning intern with Britten Sinfonia? For me there is no contest: one is the opportunity of a lifetime and the other is, well, working for Sir Alan! You might be muttering “She’s deluded! I know which I’d rather!”, but think again; for six figure salary or not, working at Britten Sinfonia is more my cup of tea (even if it is me making it!).
At a time when jobs were (and undoubtedly still are) few and far between, this internship provided the ray of hope that I needed, and if internships were the new rock n’ roll, then I wanted to be Elvis Presley. So what do I actually do everyday? Well, anything I do contributes to the aims of the Creative Learning department which is to enable audiences (schools, businesses, families, students etc.) to learn more about the music Britten Sinfonia plays and to get them involved in making their own music. This, however, ranges from putting together budgets and proposals for new projects, fixing musicians, securing funding, contacting schools, and liaising with venues; to paying musicians, organising travel arrangements and more recently, squelching in the mud with children from 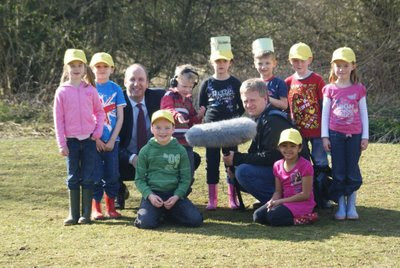 a local primary school as part of the Great Fen Project (see Karl Heidel's photo)……to name just a few! And that’s only one month in! Of course there is the obligatory photocopying to be done and cups of coffee to be made (after all ‘intern’ can also mean imprison!) but fortunately there isn’t too much of it and I’ve taken to looking at it as ‘character building’! In fact the emphasis is much more on my personal and professional development hence why I have already been given my own project to manage and why I will also gain experience in marketing, concerts and fundraising whilst I am here.
Consequently, no day is ever the same because, a bit like that box of chocolates in Forrest Gump, I never know what I’m going to get next - unlike Majid and the other Apprentice contestants who face corporate task after corporate task. Hence not only do I gain broader experience and in a more interactive way but arguably I get greater job satisfaction and in a team that works together in harmony rather than competes against each other; this job is mine to make my own and mould how I want instead of jumping through hoops for the televisual entertainment of the nation (although don’t get me wrong, I enjoy watching as much as the next person). Talking of which, nor do I get ridiculed by the nation but instead work in an environment conducive to learning where I receive constructive comments rather than just criticism, and, unlike Rocky, a catering manager and the previous weeks’ reject who was fired after a catering task (ouch!), I am not damaging my future career prospects, but enhancing them.
As a French graduate, this internship may not have been the obvious choice but I saw it for the excellent opportunity that it is to mark out a career in events management. At the end of the day, despite our differences, what I and the Apprentice contestants have in common is that the processes we’re going through are all about striving for that dream job – it’s just that I get to do it in a much nicer way! One final way I trump Majid’s experience? He left with those immortal words “You’re fired”; I’m hoping I leave on a much better note! (At which point one of you might be lucky enough to be the new intern!)
Posted by Britten Sinfonia at 11:59