We’ve just uploaded the orchestra’s new publicity photos on to flickr! Take a look and let us know what you think. 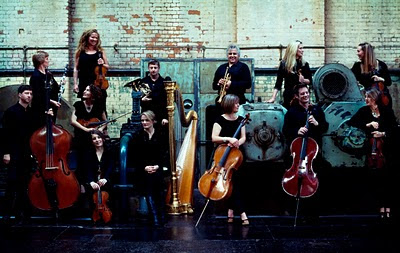 Photographing an orchestra in an interesting way is always a challenge – trying to capture a live and dynamic ensemble is quite difficult with a static photo. You come up with an idea and then realise another orchestra has already done it or it dawns on you that it just won’t work.

For this set of images we worked with photographer Sussie Ahlburg. She’s photographed a number of soloists and ensembles in an engaging style. Firstly, we had a meeting with her to discuss what we wanted the new set of photos to convey and how we would be using them. At our meeting we realised the location for the photos was going to be key and set Sussie the challenge of finding somewhere that would be suitable. Sussie came back to us with some ideas and we settled on the Wapping Hydraulic Power Station. This is a fascinating industrial building tucked away in a corner of London. It is now used as an exhibition space and café/restaurant (they serve excellent coffee!) but still houses a lot of the machinery used when it was a power station.

Our next challenge was finding a date that the musicians could attend. We wanted a selection of players who represented the different sections of the orchestra. Britten Sinfonia is made up of a core group of freelance musicians and as with all freelancers it’s always difficult to get them in one place at the same time!

Eventually it all came together and late last year we congregated at Wapping Power Station. Once all the lights had been set, furniture moved and the make-up artists had done their work it was time to start the shoot. Sussie started with the smaller group photos and then on to the whole group. Sussie’s experience paid off as she worked fast to capture the smaller and whole group shots; standing around for even a short amount of time can lead to people looking bored in still shots. After these photos we then moved on to individual portraits of some members of the orchestra which will be great to use in programmes or online when they feature in a specific concert.


We’re all really pleased with the results of the photos and will be using them online, in print and for press purposes for the coming season. Hope you like them too!

Posted by Britten Sinfonia at 17:00