It happens very rarely but sometimes a soloist or conductor has to pull out of a concert at the last minute. This is usually due to illness and this is exactly what happened to Britten Sinfonia last week.

We had a wonderful concert planned as part of the Brighton Festival with the exuberant and talented violinist Pekka Kuusisto. As usual with our concerts meticulous planning goes into each programme and for this performance Pekka and our artistic team had created an evening of music focussed upon the juxtaposition between Vivaldi’s Four Seasons and Piazzolla’s Four Seasons of Buenos Aires. Pekka was at the centre of this programme, as he would be not only the soloist but would also lead and direct the orchestra in the rest of the concert which was to feature music by Sibelius, Rautauvaara and a selection of duos for two violins by Bartok. After working with Pekka on our Britten in America tour with Mark Padmore the musicians were all very much looking forward to working with him again. 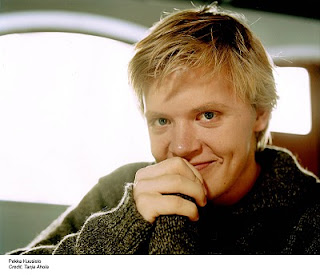 Then, a few days before the performance, our concerts director received a phone-call to say Pekka had strained his hand and may have to pull out of the concert. He really didn’t want to cancel and said he would make a final decision by the end of the following day. At this point heads were scratched and brains whirled into action as to what our Plan B might be. With Pekka being at the heart of this programme it wasn’t the case of just finding another soloist who could step in for one concerto but thinking more creatively of how we could retain the essence and style of Pekka’s performance and programming. Our concerts director spoke with Pekka as to whether he had any ideas and she also spoke to the leader of the orchestra, the inspirational Jackie Shave. A Plan B was formed, but with fingers-crossed that it wouldn’t be needed.

Then, on Tuesday our fears were confirmed. Pekka had seen a specialist who had recommended complete rest for his hand which meant no violin playing. Our Plan B swung into action. Back in October 2009 we had performed Eight Seasons at Norwich Theatre Royal as an opening to our regular series of concerts in Norwich. On that occasion four violinists from the orchestra played a season each from the Piazzolla and Vivaldi works. The concert was a huge success with the audience and as some of the same violinists were in the orchestra for the Brighton concert we thought we’d do the same again. However as Pekka would have led the rest of the programme our regular leader Jackie had not been booked for this concert and we really wanted her to be in charge. A few phone-calls, emails and texts later Jacqui had managed to change her diary around so that she could direct Britten Sinfonia for this project. This was incredible at such short notice and she even agreed to perform the 1st violin part of the Bartok duos having never played them before.

We then had to ask whether the violinists of the orchestra would take on the solo roles in the Vivaldi and Piazzolla. Jackie agreed to do one movement and Miranda Dale, Principal 2nd violin agreed to perform three pieces, some of which they had performed in Norwich back in October. Magnus Johnston, one of our principal players agreed to take on another movement and finally Warren Zelinski stepped up and said he would do the final three movements.

For the Bartok duos, Miranda, Magnus, Warren and another of our players Nicola Goldschieder agreed to be paired with Jackie. Another change was also made to the programme and instead of Sibelius the orchestra would perform Erik Sven Turr’s Passion-Action-Illusion which they previously had performed at the City of London Festival.


And then the concert day was with us. The musicians and staff travelled down to Brighton separately and arrived at St George’s Church, Kemptown for an afternoon rehearsal before the concert that evening. Upon arrival Jackie realised that she had left her suitcase containing her concert dress, music and other important apparel on the pavement in London as she was loading up her car (luckily it wasn’t her violin though…!). Once again, the orchestra pulled together – one of our first violinists offered Jackie a concert dress and our concerts director ran into Brighton centre to pick up some accessories for her.

The audience had all been informed of the change in soloist before arriving for the concert but as they entered the church you could tell there was a sense of anticipation and frisson in the air. The orchestra took to the stage and Jackie introduced the programme, explaining the circumstances for the changes and even told the audience about her forgotten suitcase. The concert was superb, the soloists each performed wonderfully and Jackie was her usual inspirational self. The audience were transfixed whilst the musicians performed but after the end of each work they burst into rapturous applause.

One member of the audience later commented;
“The ensemble dealt superbly with the loss of the soloist; one or two looked a little nervous before stepping forward but all performed wonderfully, the integrity of the programme (as Jackie put it) was maintained, and the variety of approaches in the Vivaldi made me listen more attentively than I sometimes do… in particular, the blend of superb musicianship with a informality and obvious enjoyment from the musicians was a refreshing change.. It helped to bring alive a programme that was – mostly – for me and my companion uncharted territory.”

We would like to thank each of the musicians particularly Jackie, Miranda, Magnus, Warren and Nicola for stepping in at the last moment and performing so wonderfully. And also wish Pekka a speedy recovery.
Posted by Britten Sinfonia at 09:52