This October Britten Sinfonia and Nicholas Daniel will premiere James MacMillan's new Oboe Concerto in a series of concerts (which he will also conduct) in Birmingham, London, Norwich and Cambridge. The orchestra will also be performing a number of his tribute pieces during the first concert in our At Lunch series. In this article James describes his ongoing relationship with Britten Sinfonia and how it has grown over the years. 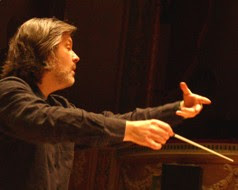 As a composer and conductor it is wonderful to have an ongoing relationship with a particular orchestra like the one I have with Britten Sinfonia. It allows you to really get to the heart of an ensemble; to get to know the players well and what their strengths are, to understand their philosophy and vision, and to see an orchestra develop and grow.

Britten Sinfonia have performed my music since their inception but our relationship really took off when the orchestra performed (and I conducted) the world premiere of my opera, Parthenogenesis in 2000 in Cambridge and at the Edinburgh International Festival that same year. Last year we revived this at the Royal Opera House in a new version directed by Katie Mitchell which was particularly thrilling. There have been a number of other collaborations, notably a tour of the UK and Netherlands featuring the concert premiere of my Second Piano Concerto and I’m delighted to see is featured again in Britten Sinfonia’s 2010/11 season in May 2011.

This season I am closely involved in several exciting projects with Britten Sinfonia. Their award-winning Lunchtime series features a number of my ‘tribute’ pieces – these are a selection of short works that I have dedicated to people I have known or admired. I am incredibly touched that Peter Maxwell Davies is to write a new piece for this series of concerts. His influence has pervaded the UK and international music scene and I have admired his work for a number of years. I can’t wait to hear what he has written!

In October my new work, an Oboe Concerto for Britten Sinfonia and Nicholas Daniel will premiere at Birmingham Town Hall, who have also co-commissioned the work, before touring the UK. The concerto is written specifically for Nick, and is the result of a number of years knowing and working with him. The work will be a little over 20 minutes, and is in three movements. The really hard work on it has been in the last six months, and in the work are some allusions to another solo piece of mine – ‘In Augustiis’ – which is also in Nick’s repertoire. I will also be conducting this concert which includes music by two composers that are particularly close to my heart, Shostakovich and Beethoven.

I am sure these projects will only deepen already fruitful relationship with Britten Sinfonia and we are already planning some exciting collaborations for the future – watch this space!