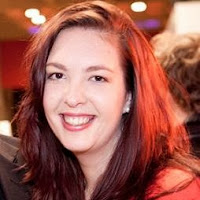 Gabrielle started work at Britten Sinfonia as Development Assistant a couple of months ago. Gaby has been busy organising the receptions for our recent 20th birthday concerts but found the time to answer a few questions about herself;

What has been the highlight of your career so far?
Trying caviar for the first time at the Waitrose yearly party organised at the Orangerie in the Kensington Palace whilst I was managing a String Sextet.

When are you happiest?
When I’m surrounded by the people I love and we are laughing so hard I can’t breathe.

What is your greatest fear?
Our irrevocable replaceability: “I mean, they say you die twice. One time when you stop breathing and a second time, a bit later on, when somebody says your name for the last time.”  Banksy

What is your earliest musical memory?
My mum singing all the Liza Minelli, Barbra Streisand and Shirley Bassey classics. Then being 5 and telling everybody I wanted to be an Opera “diva”.

Which living person do you most admire, and why?
I would lie if I said anybody else than Beyonce Knowles. Some classical musicians would do well to follow her lead and let their inhibitions let loose!

What was your most embarrassing moment?
When I let my inhibitions a little too loose and my skirt dropped to the floor when I was on stage and I had to run off to the dressing-rooms and cover my shame.

What is your most treasured possession?
A grand piano that is a family heirloom. It’s in bad shape and hasn’t been tuned in decades but my life-ambition is to restore it to its former glory.

What would your super power be?
I cannot share this publicly. Suffice it to say there would be far fewer wars as people would be too busy elsewhere!

If you were an animal what would you be?
A honey badger.

What is your most unappealing habit?
Auto-cannibalism. That makes it sound way worse than actual: I just eat and pick a lot at the skin around my fingers and it’s quite unappealing and incredibly painful.

What is your favourite book?
El amor en los tiempos del cólera by Gabriel García Márquez. A romantic story that is wonderfully and realistically flawed. Hopefully I will know such a sweeping passion!

What is your guiltiest pleasure?
Eating two chocolate éclairs one after the other.

Who would you invite to your dream dinner party?
Serge Gainsbourg and Whitney Houston.

If you could go back in time, where would you go?
The American 60’s as they had The Doors, Janis Joplin and Jimi Hendrix.
Posted by Britten Sinfonia at 13:55