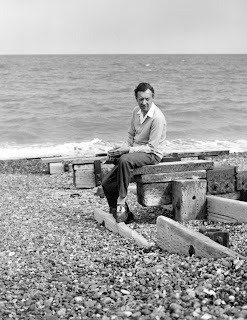 Britten’s centenary feels less like a retrospective than a springboard into the future. While many familiar works will be played, there’s the opportunity to look at some of the music which, while hardly neglected, is heard less often than it should. Britten’s remarkable versatility means that his music works well in unfamiliar contexts and in unexpected company. Britten Sinfonia is an ideal partner, bringing together opera, dance, song, choral music and music for children, performed by an inspiring new generation of musicians.

Nothing in the Sinfonia’s programming can be taken for granted. The Serenade is one of Britten’s best-loved and frequently played pieces, but doesn’t very often find itself in the company of 12 pieces chosen to contrast with it and show it off. The wondrous invention of Our Hunting Fathers, written when the composer was only 22, will be heard in the context of the rarely heard but brilliant concertino Young Apollo and the beautiful Suite ‘A time there was...’ from his last years; with Tippett’s magisterial Corelli Fantasia at the centre (Britten and Tippett were close friends in the 1940s and 50s). Dance did not play a major role in Britten’s output (The Prince of the Pagodas apart) but choreographers have increasingly been drawn to his music, Richard Alston prominent among them.

Curlew River’s restrained exoticism is offset by the earthiness of Saint Nicolas: both works have religious themes, but Britten’s attitude to religion was never a conventional one. And he would, I think, have been a little surprised, but wholly approving, of the unconventional approach that this series demonstrates. As he would have thoroughly approved the commissioning of 6 major works to mark his centenary, a collaboration between the Britten-Pears Foundation and the Royal Philharmonic Society (whose bicentenary it is), represented here by Judith Weir’s new work.

Colin Matthews is a renowned composer who worked with Benjamin Britten and Imogen Holst. Find out more about Colin via his website
Posted by Britten Sinfonia at 10:20