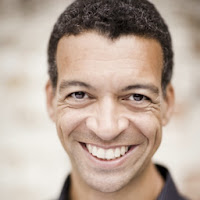 Please summarise yourself in one sentence:
I’m Roderick Williams, I’m probably better known as a singer than I am as a composer, and I am an operatic baritone, recitalist, and sometime composer.

What do you like about music and singing?
The thing about singing is that you get to take part directly in the music, there’s no instrument, there’s no interface. It’s just something that you do when you’re alone in the bath or in the shower… Singing is primal in that way. And I really enjoy the physical feeling it gives me. And when I’m performing with other people I enjoy the communication part of it too. I enjoy being able to see an immediate effect in people’s eyes as I am telling a story, or whatever it is I happen to be doing.

What inspires you?
I’m inspired, I think, by fantastic music – of course one is bombarded with music all the time. Whether I’m in rehearsals or just driving in the car with the radio on, there’s always music coming at me and I find a great deal of it inspiring. I find also less good music inspiring, because that makes me want to compose. I hear something and I think “Oh I could do better than that, or I’ll have a go at that”! And equally I find performing and listening to masterworks a little intimidating and I wonder how I could ever follow in the steps of such masterworks… But at least I try!

What are your feelings about new music and what we’re trying to do with Musically Gifted?
I perform a great deal of new music. Some of it I find very exciting, some of it has a reaction with an audience that I hadn’t imagined. Sometimes I can underestimate a piece or a composer’s power. This is the composer’s part of me, with my composer’s hat on - I can sometimes look at a piece and think it doesn’t amount to much and be unaware than when it comes to the performance, it really has muscle. So I’ve learned quite a bit from that.

As for the Musically Gifted scheme, having performed so many premieres, either of songs or maybe even taking part in operas, it’s always exciting for me to have my name as the first performer on the score. It’s a little moment of pride for me there, having my name written down. In the same way that I perform some masterworks from the last fifty to a hundred years, I see the names of previous baritones and I love to think that I’m part of that line. And so it is with dedications, you see a piece that’s been commissioned by a huge symphony orchestra paid for by some huge corporation and then there’s a dedication at the top of the score that might be something very special and personal, and maybe isn’t immediately apparent when you first look at the score. They all have stories and that’s quite intriguing. And you often see in programme notes the story explained of who “Bill” happens to be… There’s something quite romantic about dedications, and when I get a chance to dedicate my own pieces I also send little messages to people; little votes of thanks here and there.

Is composing something that you want to be more recognised for?
It’s a little difficult because I think a lot of composers have an eye on immortality and I wouldn’t begin to imagine that my music would be anything more than functional in a way. And if it achieves anything beyond my time that’s all well and good, but I’ve got my eyes on the moment, as a performer. I like my music to get an airing rather than writing huge numbers of string quartets and symphonies that I store in a cupboard to be discovered on my death and then for me to reign supreme. Somehow I don’t think that’s going to happen! So I’m very interested in the way performers shape pieces, and part of the way I write now is I allow a performer a great deal of input into my music and how it should go, in the hope that each performance is different and in the hope that performers can take my music and make it their own. So I don’t prescribe utterly how it should go, with exact markings on how every millisecond should sound because I think you might as well present people with a definite recording and say “that is it, set in stone”. I think that’s a shame.
It would be lovely to be known as anything actually! My mum knows who I am…

What was your reaction when Britten Sinfonia commissioned you?
Commissions are always very exciting because it shows that someone somewhere has really listened and enjoyed something that I’ve done, and found it worthy. With my singing career, I’m happy to take criticism, good or bad, I feel reasonably confident that I know what I’m doing. Now, in composition it’s entirely separate, and it’s much more like my own baby, my own child, and I am much more worried about reaction to it and people’s perception of it - desperate for encouragement. So just the fact that, not just anybody but an orchestra that has as much pedigree in modern music as Britten Sinfonia, should want to commission me, I find terribly exciting.

What’s your musical guilty pleasure?
I love harmony. Harmony really inspires me, I particularly love jazz harmonies. I enjoy jazz and pop. I love having the radio on and just not knowing what’s going to come up next. And I’m as likely to be moved to tears by a bit of Marvin Gay as I am by a bit of Mahler. So I don’t know if that’s guilt or not but whatever sort of music it is, if it speaks to me, it goes deep.

How do you relax?
The thing that helps me relax a lot is walking. The tricky thing for me is that there’s always going to be some sort of music playing in my head. This German idea of the Ohrwurm – the piece of music that just keeps going round and round. The worst thing is that it’s quite likely to be a really naff tune that gets stuck in there. This is why I often have the radio on. Radio 4 so that people can talk to me, or music that I’m not in control of; someone else’s playlist going round. But the idea of getting outside and walking in nature, I love that! That’s how I relax. Wherever I am in the world, if I can, I get the chance to get out of my hotel, out of the arts centre, and get out into the hills – that’s what I love doing.

If you hadn’t been a musician, what might have happened?
That’s a very difficult question to answer because in a previous life I was a music teacher before I started my career as a singer, but it still has the word music in it. So if I’d just been a teacher I don’t know what I would have taught.

Any other passions?
That I could turn into a job?! You see the problem with that is that everything I do at the moment I do because I really enjoy it, and the fact that people are happy to pay me for it is a wonderful bonus. But if you ask me what I’d be doing if it wasn’t for music and it was a profession, then I’m a bit stuck! No – when my career is over I’ll come back to you and answer that one!

Is there anything else you want to share with the world? About you, music, politics or anything?
What’s in my heart that I’d like the world to know? That is tricky. I think the easiest way to answer that is sort of an advert, because the best way to get an answer to that is to listen to my music, or if not that you should listen to me singing other people’s music. Because I can’t give an answer to that question without sounding glib. The only way I can do that is musically, that’s the only realm where I’m comfortable to answer that question!

Roderick Williams’ new work will be performed in the following At Lunch 2 concerts in 2014: