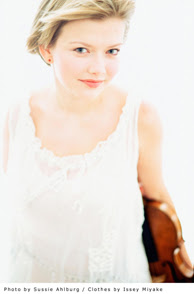 The good news is that concert-goers can hear Ibragimova playing live with Britten Sinfonia, in a programme that includes the very concerto that bowled the critics over, Hartmann’s Concerto Funèbre , written in 1939 to protest against Hitler’s occupation of Prague . The programme also includes a Bach violin concerto and Schoenberg’s luscious string work, Verklärte Nacht .
Posted by Britten Sinfonia at 16:08