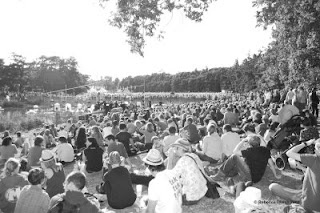 Playing outdoors (acoustics, wind, rain!) certainly makes for a more challenging environment, and I was pleasantly surprised by how well the balance and nuances of the orchestral performance were transmitted. Other highlights were the Loch Fyne food stalls (mussels!), compost loos (!), the random artwork dotted around and generally the cleanliness - people seemed much more considerate than normal festivals/gigs...perhpas due to the £2 cup deposit! I highly recommend Latitude for next year! See more pictures from Latitude
Posted by Britten Sinfonia at 14:45