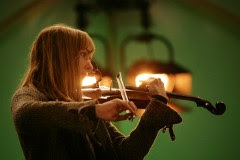 'It is Ibragimova's ability to pick out those melodies and shape them with deceptively unfussy nuance that makes her mesmerising.' Erica Jeal in the Guardian the other day, reviewing Alina Ibragimova's two concerts of bach's solo repertoire, part of the City of London Festival, in which we are playing tonight.
Posted by Britten Sinfonia at 14:20