Tenner for a Tenor Campaign 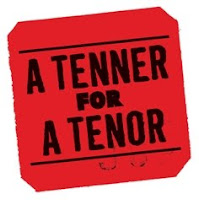 On Tuesday we launched our exciting new crowd-funding campaign Tenner for a Tenor. The aim of the campaign is to fund a new commission by Jonathan Dove for tenor Mark Padmore and Britten Sinfonia. We hope this model of funding new commissions will inspire people who have never thought of donating to contribute as we are only asking for donations of £10!

Working with Carly Murphy-Merrydew (design concept) and the guys from Wash Media (film) the promotion of the campaign compares items which cost £10 (which doesn’t get you much these days) and includes sausages, train tickets, wine and flowers! Take a look at the short film which captures the fun and quirky nature we’ve taken with promoting Tenner for a Tenor. 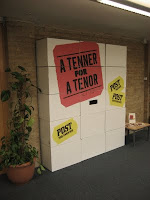 Launch events took place at our At Lunch concerts in Cambridge on Tuesday and London on Wednesday and tomorrow (Friday) we’ll be launching the scheme in Norwich. We’ve also created a giant postbox where people can post their donations at concerts but you can also donate online and via SMS text message.

So far we have had over 50 donations and the scheme is generating press and viral interest for its innovative way of encouraging philanthropy in the arts. Donors will have their name acknowledged in the score of the new work and will also get behind-the-scenes access with special email and video updates as the new work is written.

Posted by Britten Sinfonia at 16:03