This week we start on a project with Norwegian trumpeter Arve Henriksen. Whilst we’ve been putting together the programme for this tour we’ve discovered that Arve has a fascination with the Japanese instrument, the Shakuhachi.

You may ask what is a Shakuhachi? It’s a Japanese flute traditionally made of bamboo, held like a recorder but blown like a western flute (i.e. like blowing across an empty bottle). It was originally used by Japanese Buddhist monks in the art of suizen meaning blowing meditation. The Shakuhachi has five finger holes which are tuned to the pentatonic scale however the player can vary the pitch by adjusting the blowing angle and shading or partially covering the finger holes. 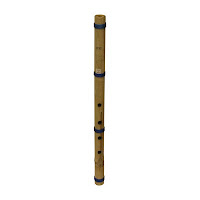 I became familiar with the Shakuhachi a few years ago when my Dad took it up. I’ve heard many hours of him practising and seen him perform live a couple of times before with a traditional Japaense Zen ensemble featuring a koto, biwa and shamisen. The tone of the Shakuhachi is hauntingly beautiful and it is said that it replicates the full range of nature on earth. Due to the way a player can bend the pitch there are a wide variety of subtle and incredible sounds which can be produced.

Whilst Arve was studying the trumpet at Trondheim University he was introduced to recordings of Japanese music and in particular to the sound of the Shakuhachi. Arve was fascinated by the timbres of this traditional Japanese instrument: ‘I let the music “ring” and develop in my head. I was astonished by the sound of this flute...’ Although it stemmed from an altogether different sound world to that which he had been used to, ultimately it began to influence his own playing as a trumpeter: ‘This has made me work with tone and sound-making in a new direction.’

Henriksen’s forays into Japanese music led him to develop new ways of playing the trumpet, using different forms of breath control and embouchure to create new sounds. As reviewer Brian Howe writes: ‘He made his instrument sound like a woodwind, a flock of birds, a Japanese flute, a punctured helium balloon. His strangled yet fluent tone is marked by a vivacious Scandinavian melancholy and a hint of noir... Notes float on cushions of air or clang like lead; they sigh, squeak in distress, bleat, and taper off into thin shrieks. When ravishingly full tones break out from the baroque constraints, the effect is devastating.’

We’re really looking forward to working with Arve and hearing his unique sound. Alongside pianist Joanna MacGregor we will be performing pieces from his acclaimed ECM album Cartography alongside works by Arvo Part and James MacMillan. The concerts take place in Norwich (as part of the Norfolk & Norwich Festival), Cambridge, London and Bath (as part of the Bath International Music Festival).

Posted by Britten Sinfonia at 14:13