Alina Ibragimova once again joins Britten Sinfonia in late February/early March for the tour of our Baltic Nights programme. Alina has been a regularly collaborator with Britten Sinfonia, first performing with us in 2006 for our At Lunch series of concerts. Aged only 21 Alina, performed lunchtime concerts in Krakow, , Aldeburgh, Cambridge, Norwich and London.

The programme for these At Lunch concerts featured the premiere of Huw Watkins Dream (later released on Britten Sinfonia’s Songs of the Sky CD), Michael Zev Gordon’s Fragments from a Diary and works by Stravinsky and Bartok.

In 2007 Britten Sinfonia joined Alina in the studio to record Concerto Funebre for violin and orchestra by the little known composer, Karl Amadeus Hartmann. Hartmann is a figure unique in German music - the only composer to stay put and defy Hitler for the duration of the Third Reich and his Concerto Funèbre, written in 1939 was a protest against Hitler’s occupation of Prague. Released by Hyperion the disc also features Hartmann’s Suite No’s 1 and 2 and Sonata No’s 1 & 2 for solo violin. 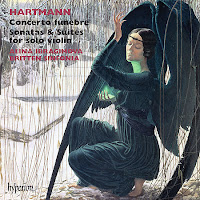 Alina and Britten Sinfonia went on to perform Hartmann’s Concerto funebre in Cambridge and Norwich. Returning to Norwich and Cambridge in 2009 for concerts entitled Bach Plus Alina performed music by Bach and Kurtag. The towering genius of Johann Sebastian Bach was the focus of these concerts, which contrasted four of his works with two seminal 20th-century pieces by Berg and Kurtág. Bach two surviving violin concertos were played by Alina.. Kurtág’s acknowledgement of his debt to Bach in his Signs, Games and Messages, which includes ‘Hommage à J.S.B.’, an exploration of a Bach-like melodic line also saw Alina take centre stage, amazing audiences with her technical ability and artistic flair. Bach Plus was also performed in Inverness and Monmouth.

In celebration of Britten Sinfonia’s 20th Birthday in 2011 Alina joined forces with another of the orchestra’s long-term collaborators, Pekka Kuusisto for a performance of Bach’s Double Violin Concerto at our Barbican birthday celebrations. 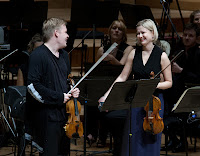 We’re really looking forward to working with Alina again. She will perform one of the two surviving Bach Violin Concerto’s alongside a beautiful and ethereal violin concerto by Latvian composer, Peteris Vasks entitled Distant Light. You can see Alina talking about the programme in our short film about the Baltic Nights programme

The concerts take place at Cambridge West Road Concert Hall on Monday 25 February, Wednesday 27 February at London’s Barbican and Sunday 3rd March at Norwich Theatre Royal. To find out more about the concerts and to book tickets click here

Posted by Britten Sinfonia at 15:57

The taxi photo is just brilliant!