Music from the Baltics 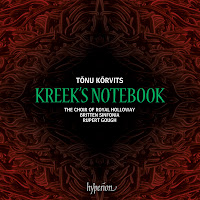 This July Hyperion Records release Kreek’s Notebook, a fascinating album of spiritual songs from the Baltics. In recent years, Britten Sinfonia has performed a number of works from the Baltic states, generally identified as those countries east of the Baltic sea – Estonia, Latvia and Lithuania. All three countries were formerly part of the Soviet Union; however despite Soviet control retained much of their individual identity.

There is a deeply rooted tradition of folksong in all three countries, exemplified by what became known as the ‘singing revolution’ – the term coined following the spontaneous mass night-singing demonstrations in Tallinn that helped lead to the restoration of independence of the Baltic states. Britten Sinfonia Voices director Eamonn Dougan agrees: "So much amazing choral music has come from the Baltic states in recent years and they enjoy such a strong singing tradition." I however, was not familiar with music from this area of the world except for the works of the ever-popular Estonian Arvo Pärt and so it has been a journey of discovery for me in recent months.

Much of the work we have performed from the Baltic states has been vocal repertoire and this includes the music heard on Kreek’s Notebook. The main work on the album by Estonian Tõnu Kõrvits is based on the traditional melodies collected by Cyrillus Kreek (the Estonian equivalent to Bartók and Grainger) in the early 20th century whilst presenting a contemporary view of these folk hymns. 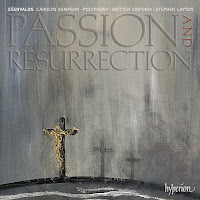 A previous Britten Sinfonia release on Hyperion is Ēriks Ešenvalds powerful yet subtle Passion and Resurrection described by an audience member as “music that is as moving as it is unforgettable even on a first hearing”. There is a fascinating podcast available with Ēriks Ešenvalds and Bob Shingleton available here which explores culture, education and religion in Lativa.

Our most recent performance project once again involved a new work by Ēriks Ešenvalds entitled AQUA, performed by both the orchestra and Britten Sinfonia Voices and featuring resonating wine glasses. Personally I found the piece both mesmerising and serene and I’m sure it will become a popular work amongst choral ensembles.

However the work that has had the biggest impact on me from the Baltics in recent months has been Pēteris Vasks Distant Light (written in 1977) which we performed in February with the stunning violinist Alina Ibragimova. Before our performances I had listened to Gidon Kramer’s recording of the work and was impressed by its range and expressiveness. Vasks’ style is deeply rooted in Latvian folk music and in the archaic folklore upon which this is founded, while combining these ancient elements with the challenging language of contemporary music. I saw the performance at the Barbican and had my breath taken away by the sheer range of emotion and total intensity of the piece bought to life by Alina. Pēteris was in the audience and after the concert bounded backstage beaming from ear to ear – he was obviously thrilled with the performance too.

I look forward to discovering more music from the Baltic states next season. In November we perform Errki Sven Tüür’s Lighthouse and also Arvo Pärt’s enchanting Cantus in Memoriam Benjamin Britten and I’m sure more will be programmed in future seasons such is the strength of the compositional talent emerging from these countries.