'In the Spirit of Gil and Miles' heads for Birmingham 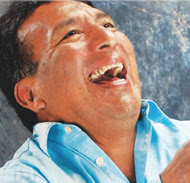 'In the Spirit of Gil and Miles' is at the Town Hall in Birmingham tonight. Gil Goldstein, Luciana Souza, Romero Lubambo and Alex Acuna join Britten Sinfonia in a programme Gil Goldstein has described as 'viewed through the lens of Miles Davis' and Gil Evans' paradigm-shifting work together'. You can still hear Gil's thoughts on our SinfoniaCast.

Anyone who has been to our concerts in the last few years will know we often work without using conductors. Why? Well, much of the music we perform simply works better when the players themselves take reposnsibility for the shape and sound, creating a chamber feel which works in surprisingly large-scale and complex pieces. We also frequently work with player/directors such as Imogen Cooper - watch out for our next project, during December.

Symphony orchestras still have to engage conductors, however, so you might be interested to see the thoughts of one of the UK's more perceptive writers on music, Ivan Hewitt, who discusses some of the new generation of maestri appointed by British orchestras in recent months in a newspaper article earlier in the week.
Posted by Britten Sinfonia at 08:34