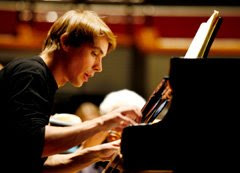 Richard Harrold was born in 1982. He has written of his new work:
'Ink is a neo-baroque study of rhythm and asynchrony. The ensemble is divided into pairs that contribute opposing material to a sparse, linear texture, whose systematic development toys with the sense of ensemble and the nature of the counterpoint. While these rhythmic and thematic conflicts exist within the group, for the most part the players move as one instrumental and sonic entity.'
Posted by Britten Sinfonia at 20:01