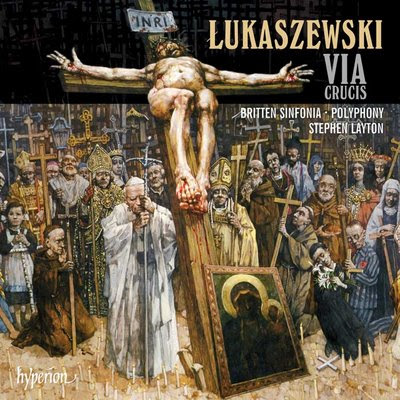 It's a March retail release, but our new recording with Polyphony of Pawel Lukaszewski's 'Via Crucis' is now available on the Hyperion Records website. Having listened to an advance copy I am glad that the impact it made in concert is captured brilliantly: its power is partly through its long, slow build - it is not the kind of piece you dip into. The striking image chosen for the cover is one of the paintings by Jerzy Duda-Gracz for the Stations of the Cross at Jasna Gora, the monastery which is the home of the Black Madonna and has a symbolic role in Poland's history. As Meurig Bowen writes in the CD booklet, 'The journey witnessed in the Via Crucis - the conflict, the suffering, the humiliation, the defiance, the resurrection - can also be seen as a reflection on Polish Catholicism's victory over Communism'. Thus, crucifixion iconography is updated, with the Polish Pope, a concentration camp inmate and the Black Madonna icon itself. An interesting debate about CD covers has started on another blog: On An Overgrown Path. Will this new cover feature?
Our next live concert is in Chelmsford tonight; it was sold-out before the weekend, so do check with the box-office for returns before turning up.
Posted by Britten Sinfonia at 10:32