When looking through Britten Sinfonia’s advance schedule (which looks at least at five years into the future) there are often projects that appear that immediately put a smile on your face and you anticipate with excitement (in my case both personally and/or with my marketing hat on). A couple of years ago I was thrilled to spot plans on the schedule for a project including a performance of Steve Reich’s The Desert Music – a piece I have loved for a number of years. 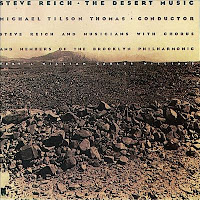 I first discovered the music of Steve Reich whilst at university – I studied The Desert Music for one of my modules and was entranced by the sound-world created and compositional techniques and structure. I bought my own score and the Nonesuch recording (no mean feat for a poor music student) – and poured over these night after night. This very much annoyed my non-music studying housemates who were all into house and dance music. I tried explaining that what they were listening to and what I was listening to was similar in so many ways and perhaps they should give minimalist contemporary music a go but to no avail.

My passion for this piece has not ebbed (the opening vocal line Begin, my friend still sends a tingle down my spine). I’ve seen a number of live performances and it still remains one of my most played recordings. It led me to discover, firstly, other works by Reich including Electric Counterpoint, Different Trains and Three Tales (which I had the privilege of seeing the UK premiere of at the Barbican Theatre) and then on to other minimalist composers.

I do hope my enthusiasm for this piece will be shared by the audience on Tuesday 9 February when Britten Sinfonia and Britten Sinfonia Voices conducted by Clark Rundell perform Reich’s The Desert Music alongside works by Louis Andriessen and Steve Martland. Book tickets here.

This concert forms part of the Barbican's celebration of Andriessen's music and life, M is for Man, Music and Mystery. Find out more about the series here.

You can listen to a Spotify playlist (including Steve Reich's The Desert Music) here.
Posted by Britten Sinfonia at 11:33