Although this programme, the second in this season’s At Lunch concerts, was created as a celebration of texture, thanks to the musicians’ skill and sensitivity it became a showcase of artful balance and ensemble. The 250-year timespan of the pieces, stretching from Bach to a new composition by Anna Clyne, showcased similar techniques and sound worlds which formed parallels between temporally- and geographically-distanced composers’ works, which was hinted at by the title of Ligeti’s Continuum. The result was a varied programme, which attested to the richness and intertextuality of the Western classical tradition.

Despite the spacious dimensions of the 500-seat concert hall, the musicians created an intimate atmosphere from the very beginning of the programme, which began with the welcome addition of the sinfonia from Bach’s BWV21. The instrumental movement set the tone for the rest of the concert, drawing the audience into the fine textural world of J.S. Bach’s 1714 cantata in its stately pace, which was maintained by the whole ensemble, despite the absence of a conductor and with no perceptible intervention from Jacqueline Shave. At the outset of the concert, the ensemble’s disposition outlined a key element of the concert. The soprano, Julia Doyle, was seated by the harpsichord at the rear of the ensemble, allowing her colleagues to take centre stage. This was a programme in which no divide was felt between the vocalist and the instrumental group, instead promoting a sense of unity, which added to the overall impression of balance.

Julia Doyle’s silvery soprano was a perfect fit for the ensemble from which her first soft sighs of ‘Seufer, Tränen, Kummer, Not’ seemed to issue in the aria from BWV21. Doyle’s expressive singing never compromised the intimacy created by the ensemble’s sparse accompaniment in this movement, establishing a mood which was carried on into ‘Chi m’addita, per pietà’, the first of two arias from Scarlatti’s Due arie notturne dal campo, arranged by Sciarrino in 2001. Whilst Doyle afforded a slightly more indulgent, warmer tone to this Italian aria, she once again appeared to work with the string players who, even in monophony, achieved a beautifully subtle balance, which supported the soprano perfectly.  Doyle’s repeat was adorned with understated decorations and never detracted from the searching, internalised mood that was shared by both the first Bach and Scarlatti arias.

Sciarrino’s layered string texture, particularly in the use of harmonics, found an interesting parallel in Pärt’s Fratres for string quartet (played today by Jacqueline Shave, Miranda Dale, Clare Finnimore and Caroline Dearnley). An example of Pärt’s ‘tintinnabuli’, a neologism of his own coinage, the success of this piece was testament to the instrumentalists’ superb grasp of balance. The four voices were so unified that the impression was of one instrumentalist rather than a quartet. The steady unfolding of Pärt’s ‘tintinnabular’ variations was effected so skilfully that the entire audience was completely motionless, including four rows of schoolchildren, as the piece’s sense of expansive timelessness stretched out, a notable achievement in a lunchtime programme of only one hour.

The ensemble found a new, more expansive, positive tone in the second Scarlatti arr. Sciarrino aria, ‘Non to curo, o libertà’. The imploring, internalised vocal tone Doyle had found up to this point was replaced with an enriched, confident warmth as the piece swung onwards. Doyle’s postural change here, opening up to the audience and allowing herself more movement, also marked this shift whilst her vocal performance always remained as restrained as the elegant strings. In the absence of oboist Marios Argiros, this all-female outfit was reunited in Bach’s soprano aria ‘Tief gebückt und voller Reue’ from Cantata BWV199, in which the pious timidity of his earlier work is replaced by a more self-assured tone. In response to this shift, the ensemble’s accompaniment was generous yet never overpowering. In return, Doyle’s attention to the soaring, more expansive soprano lines, although allowed to blossom from the instrumental texture, never detracted from her colleagues’ sensitive playing. Bach’s BWV187 aria ‘Gott versorget alles Leben’ saw the whole ensemble united in this warmer, fuller sound which accompanied Doyle’s more lavish tone in her declaration of ‘Weicht, ihr Sorgen’ (‘Worries, be gone!’), with the soprano and oboe lines joyfully interweaving above an accompaniment which glittered with harpsichordist Maggie Cole’s rich spread chords.

Cole’s performance of Ligeti’s Continuum saw the harpsichord’s capabilities span from its role in Bach’s cantatas to a more modern setting. Ligeti’s piece is at once reminiscent of Bach’s keyboard works and of twentieth-century minimalist techniques. The piece’s gradual changes and sense of steady crescendo created a sense of Cole taking a Baroque invention in all its intricacy of form and demarcation of individual notes, and slowly melting it down until smaller elements are lost in a blurred and blended sound world in which only broad changes can be perceived. As the piece moved towards the higher registers of the instrument, the percussive sound of the plectrums falling back onto vibrating strings suggested other more recent realisations of the harpsichord’s capabilities with a hint of musique concrète. Cole’s flair and sensitive playing were rewarded with applause worthy of this accomplished performance.

The nocturnal theme from Scarlatti’s Due arie notturne dal campo was echoed in Anna Clyne’s new work, This Lunar Beauty, co-commissioned by Britten Sinfonia and  Wigmore Hall. As W.H. Auden (whose poem Clyne sets for soprano, oboe, string quartet and harpsichord) and Benjamin Britten were collaborators as well as close personal friends, there was a sense of reuniting the two as the Sinfonia that bears Britten’s name played Clyne’s setting of Auden’s poem. The piece neatly encapsulated many of the programme’s explorations, mixing suggestions of British folksong with a more modern, avant-garde sound world. The setting of the poem’s second stanza sees rising scalic melismatic patterns in the soprano, echoed in the instrumental lines, suggesting a raising of the eyes and voice to the lunar object of the persona’s meditation. These more expressive, confident voices then surrender to a once again personal, introspective mood. 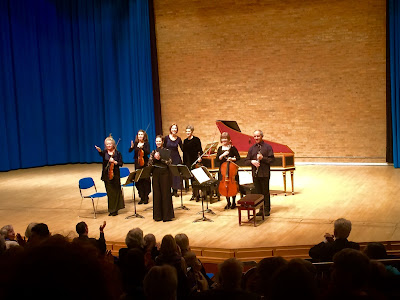 This programme showcased the capability of a small group of musicians to work together in order to create a diversity of moods and to highlight unobvious intertextual and intertemporal links between a range of pieces. Given the amount that this programme achieved, it is surprising that it lasted only an hour. It is testament to the quality of the musicianship and the diligence of the programming that the lunchtime concert was not only intellectually appealing but also contained many moments in which a weekday’s inevitable busyness seemed to melt away. All of the musicians are to be congratulated for today’s subtle yet no less powerful, varied or transporting performance.