A Development Director in Amsterdam

It’s not often that the Development team gets to travel with the orchestra for a concert overseas, so when the chance came to hear Britten Sinfonia in the world-famous Concertgebouw in Amsterdam, our Development Director, Will Harriss, jumped at the chance. 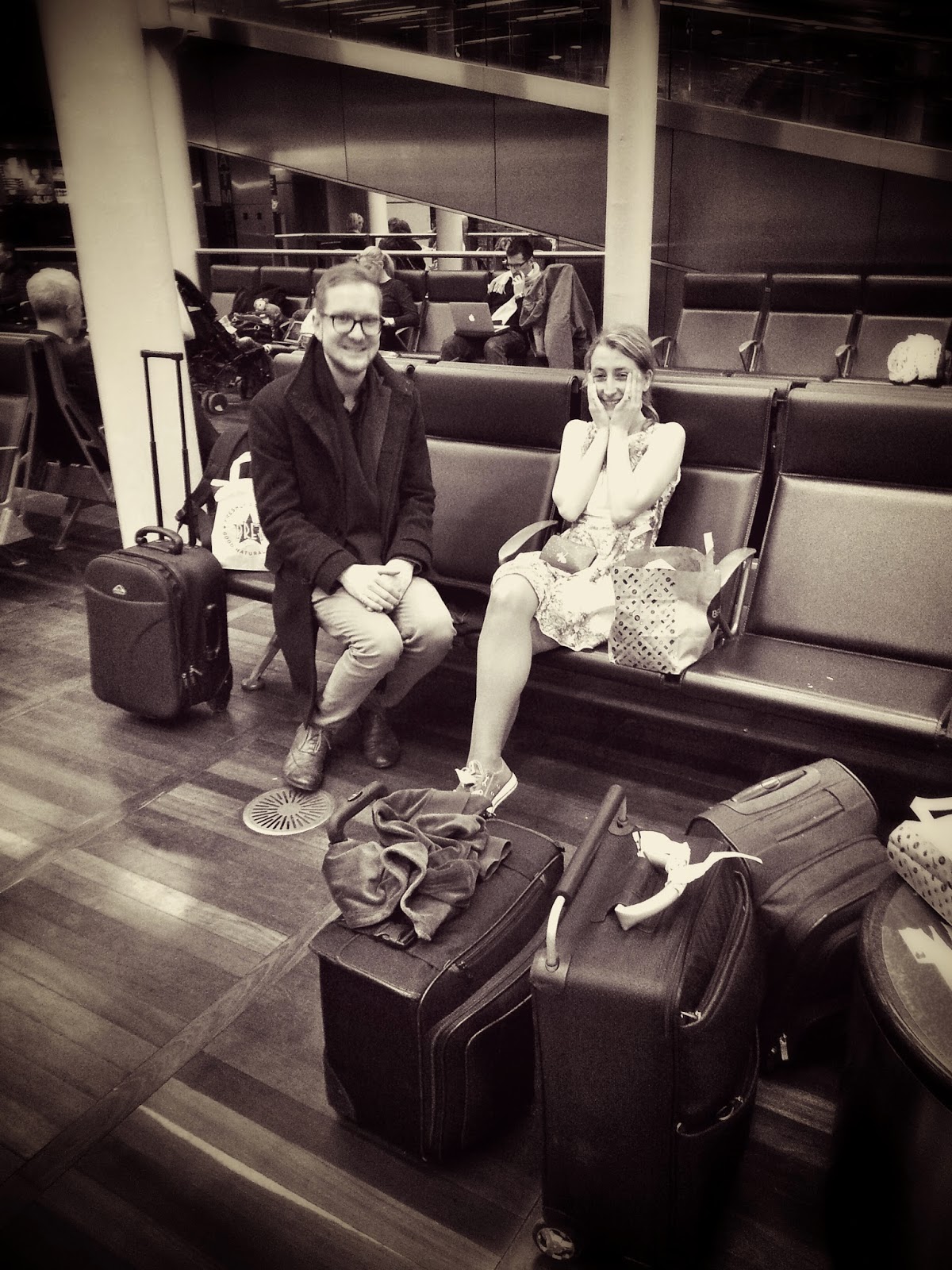 Midday, Friday 27 February 2015: Off to Kings Cross to catch the Eurostar with the rest of the orchestra. Everyone’s on time, our Orchestra Manager is busy handing out boarding passes for the train. The group is a mixture of chatting musicians, guarding their instruments carefully – afterall, a musician without an instrument won’t get very far on stage. Of course, some instruments can also be hugely valuable. It can all make touring with an entire orchestra reasonably tricky for orchestra managers – does an instrument need a separate seat? Can any instruments be hired at the destination, and how will that affect the performance? What instruments are required for which works in which concert programmes?

This is all a new side of the orchestra to me. My role is to raise the funds for the orchestra, to allow it to reach the highest of world-class standards in concert halls across the world. But even complicated funding applications seem to have nothing on the touring logistics of a chamber orchestra. I’m busy pondering all this when we are allowed to check-in and find some much-needed lunch and coffee. 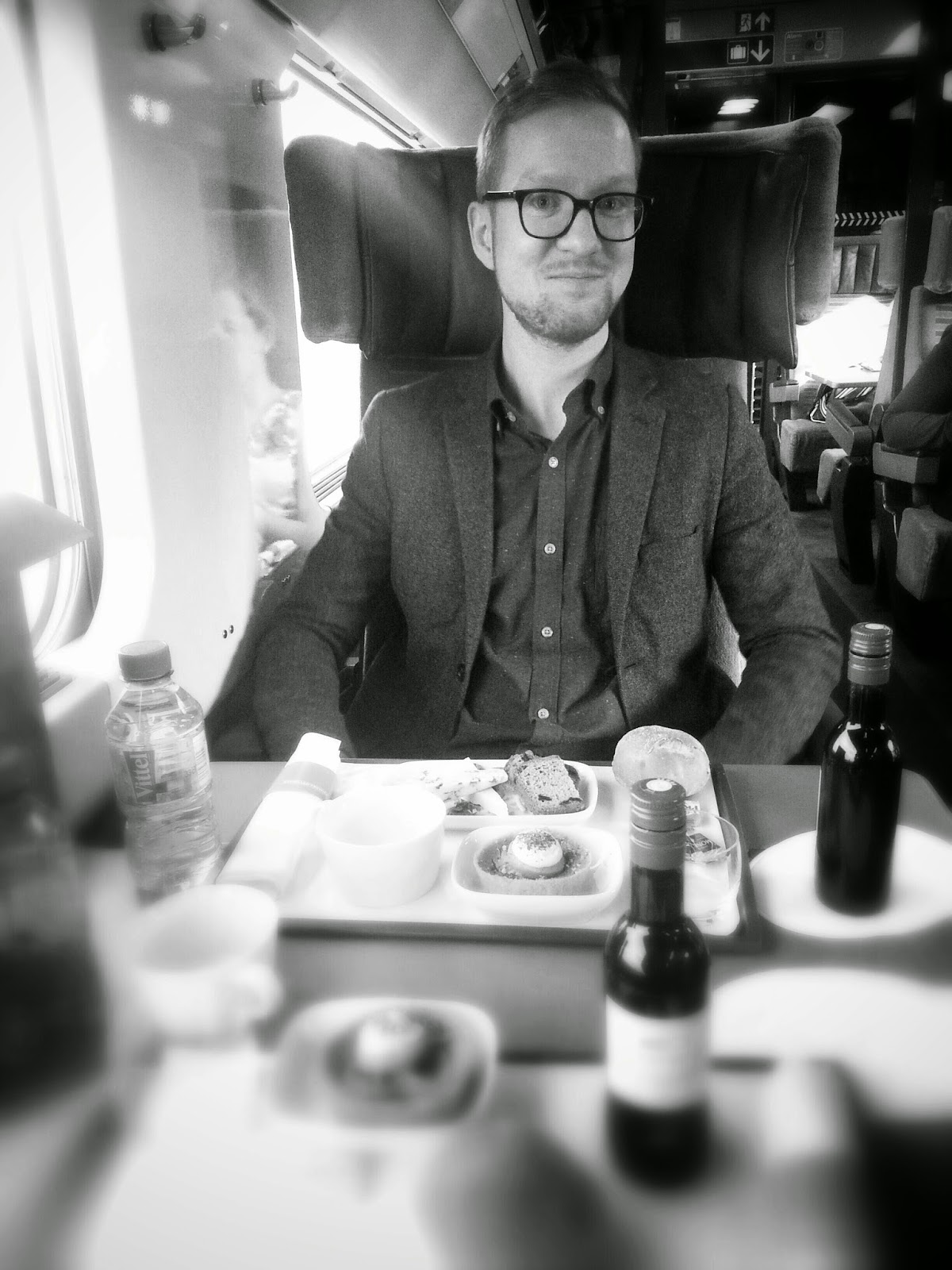 3pm: Our concerts team are calm and organised, despite newly-bought coffee being dispatched over the floor. It also turns out that lunch needn’t have been bought – an unexpected upgrade for the entire orchestra and soloists means that lunch – and some half-decent wine – is served at 150mph on the way to Brussels. I’m told that this isn’t standard on orchestral tours (!) but I think everyone’s in agreement that this is a pleasant way to travel across the continent…

6pm: We arrive in Brussels, and tickets for the final stage of the journey are given out. I go for a coffee with one of the soloists and begin pondering again the sheer scale of touring an orchestra. For this one concert date we are taking roughly 30 musicians on tour, with four soloists, 28 singers from the excellent Polyphony, and their conductor Stephen Layton. That’s over sixty people, and we are joined by our Orchestra Manager – the unflappable Annabel – and Concert Director, the equally unflappable James. Polyphony have a tour manager too – hello Fran – and Britten Sinfonia’s CEO David Butcher and Artistic Planning Director, Nikola White are already in the Netherlands for meetings, as they plan the orchestra’s future seasons through to 2018 and beyond. The choir, too, are already on tour for a prior concert. If you totalled up the annual ‘musician mileage’ by the UK’s professional choirs and orchestras, it must be into the many millions.

It’s quite astonishing by any standards, but it also reinforces the need for our environmental planning; for shorter European tours we aim to minimise our impact through catching the train (as we did today) rather than flying, for instance.

10.30pm: We’re all checked into our hotel. The final leg of the journey was uneventful, and the hotel is a short walk from the Concertgebouw, which will make tomorrow morning a bit easier to manage for the players. Off for some food and a beer, in the excellent company of composer Joey Roukens, for whom Amsterdam is his home. We talk about his forthcoming commission for our ‘At Lunch’ series, and it’s fascinating to hear about his recent and future works. Afterwards it’s back to the hotel, and reassuringly the choir have all booked in, fresh from their concert that evening. Morning, Saturday 28 February 2015: It’s confession time for me – from looking at the management schedule for the tour, I knew that about 58 musicians and singers would all be trying to get breakfast at the same time, and I also knew that the breakfast room in the hotel didn’t have 58 seats. So I decided to have a bit of a lie-in, a late breakfast, and aimed to get to the Concertgebouw just after the start of the rehearsal. I can’t tell you how exciting it was to walk down Amsterdam’s leafy streets to get to the hall, which rises majestically in front of you.


What’s that? Britten Sinfonia’s name is in lights on the front of the building? And on the posters outside? It’s a real thrill to see, and also knowing that we’re playing in the hall’s ‘Saturday Matinee’ series – one of Europe’s most prestigious concert series. 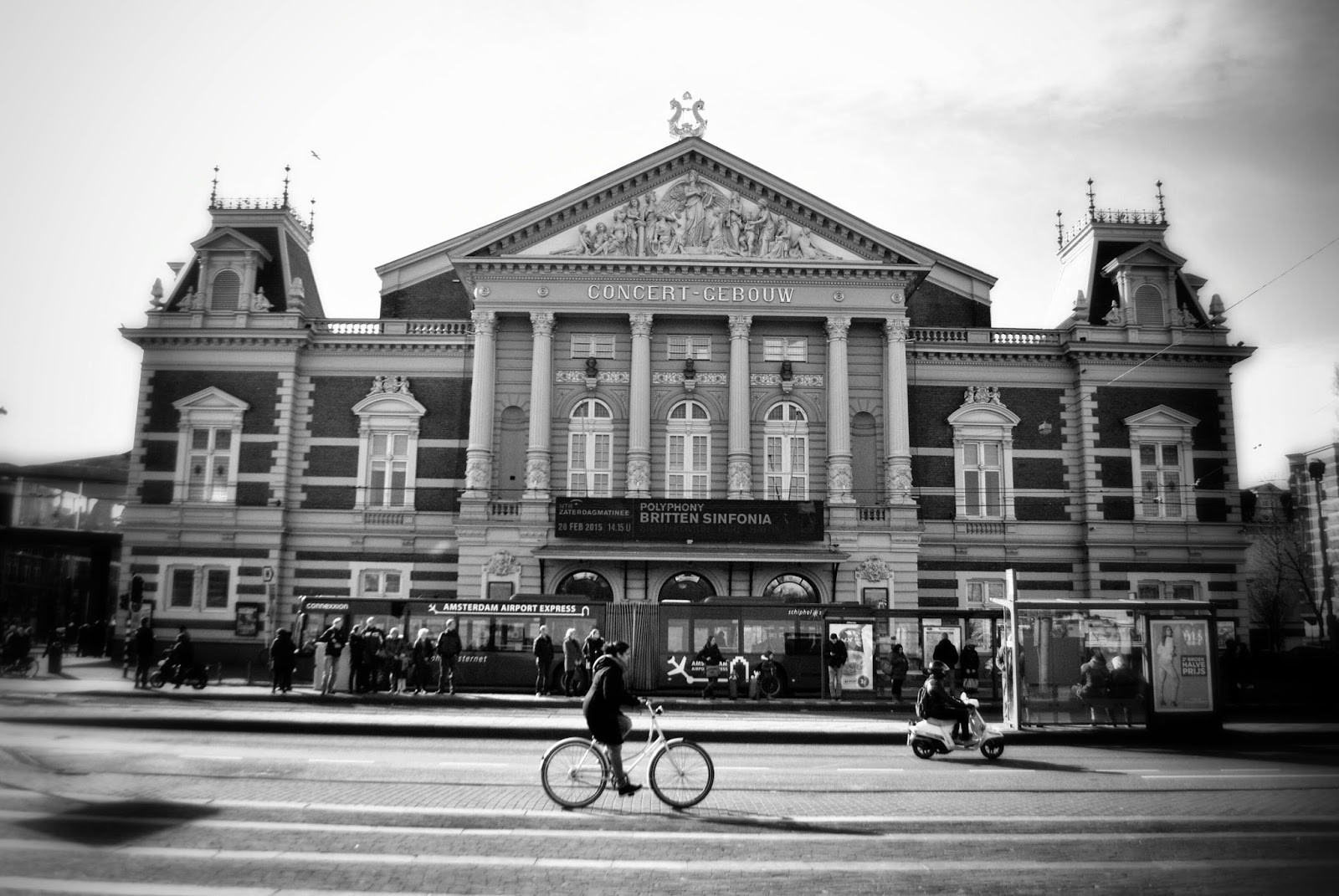 Inside the hall, I strolled down the corridors, and before I knew it I was listening to Haydn’s gorgeous Nelson Mass. The hall itself is unique and beautiful, and rightly has a place as one of the world’s finest acoustics. Built in the late 1880s, it is richly decorated, with the names of composers dotted around the hall in celebration. Some 900 concerts a year take place in the main hall and its associated recital hall, to an audience of over 700,000 people. It’s hugely exciting for Britten Sinfonia – which 20-odd years ago was just starting out – to be on stage. 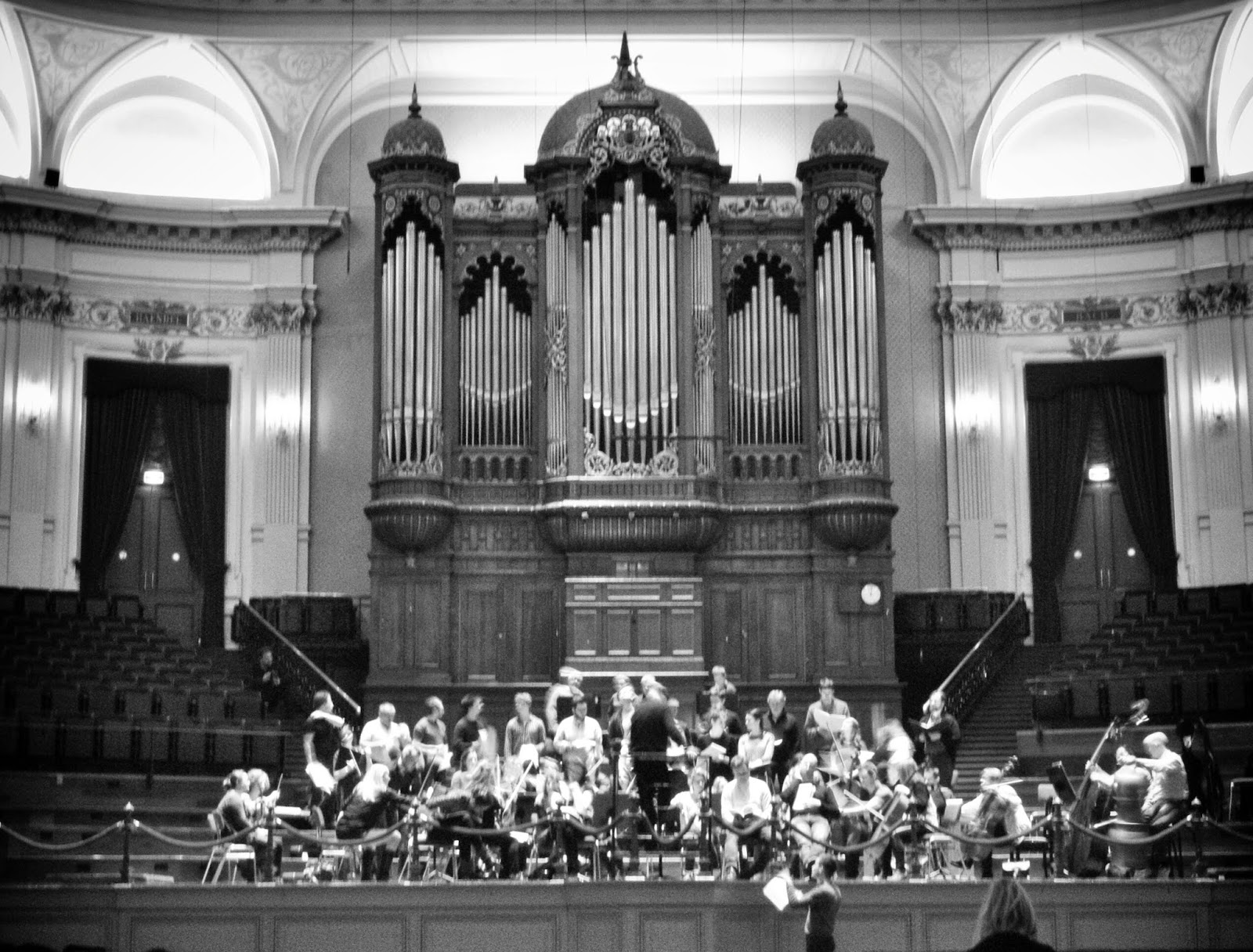 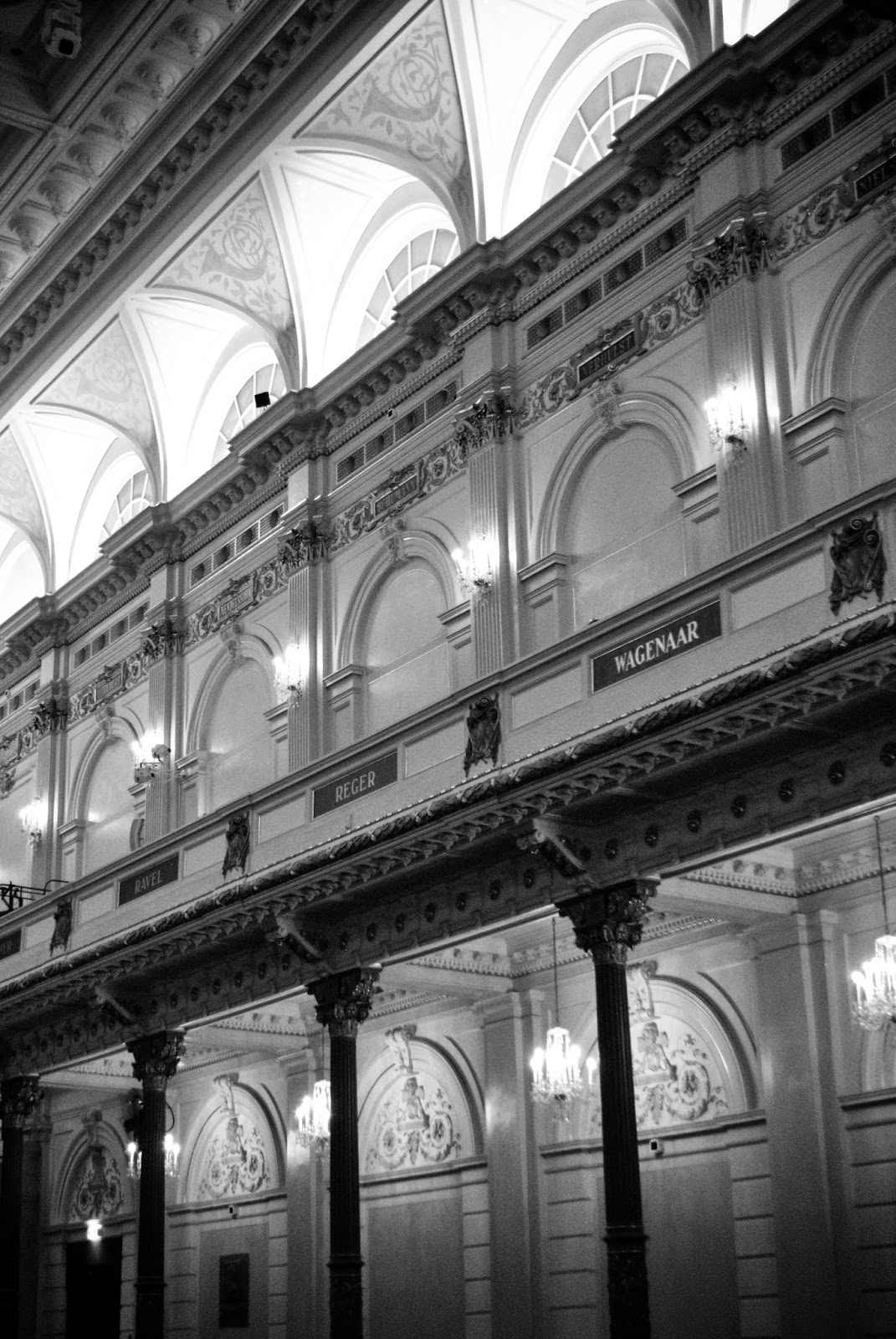 A bit later the players are getting to grips with Shostakovitch’s tricky Chamber Symphony, which is being directed by Jacqueline Shave, the orchestra’s Leader. It has a vitality about it – an urgency and directness that is completely mesmerising. It’s just as well, given that it’s also going out live on Dutch national radio, but I’m reminded again just how special this band is. 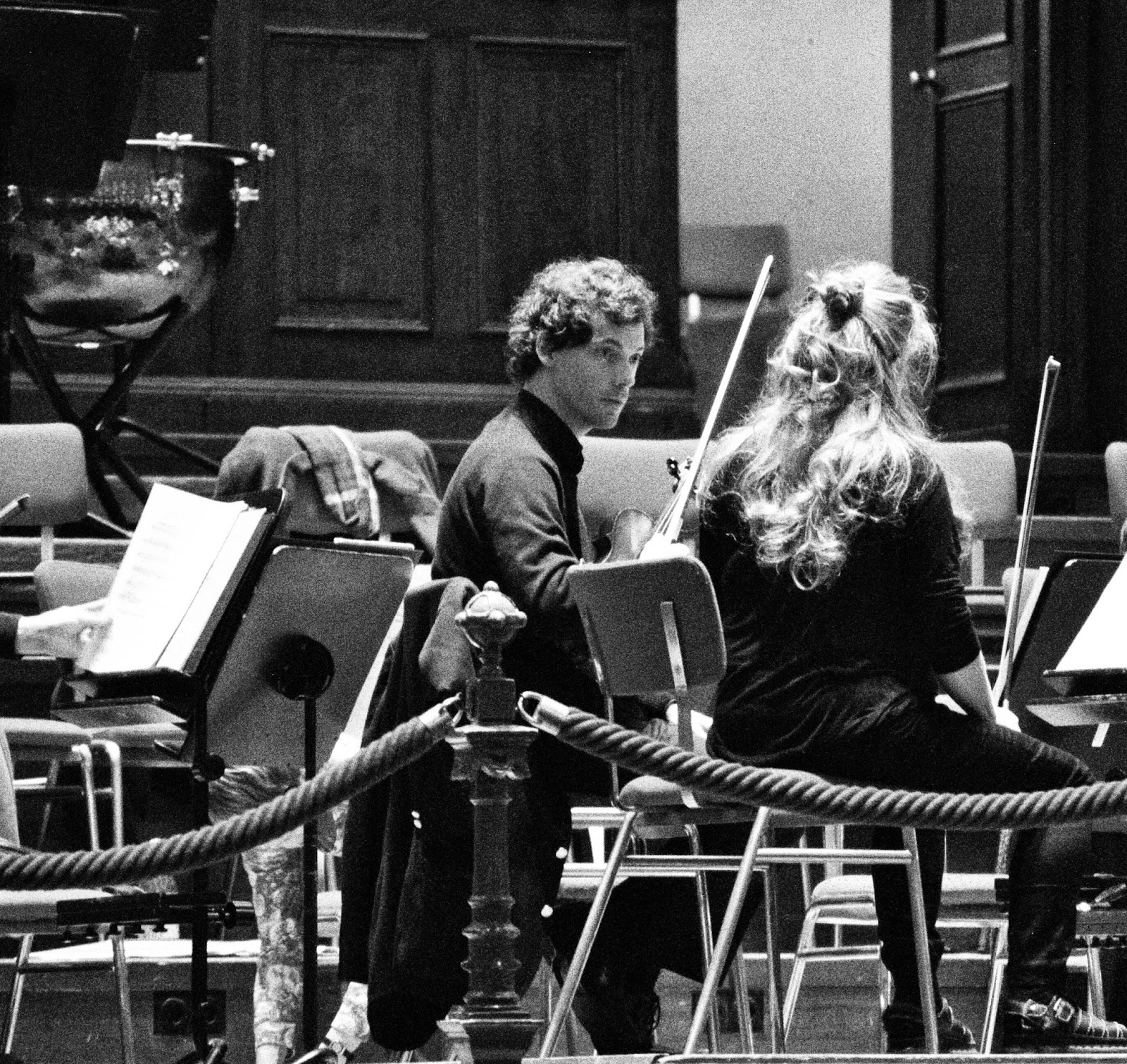 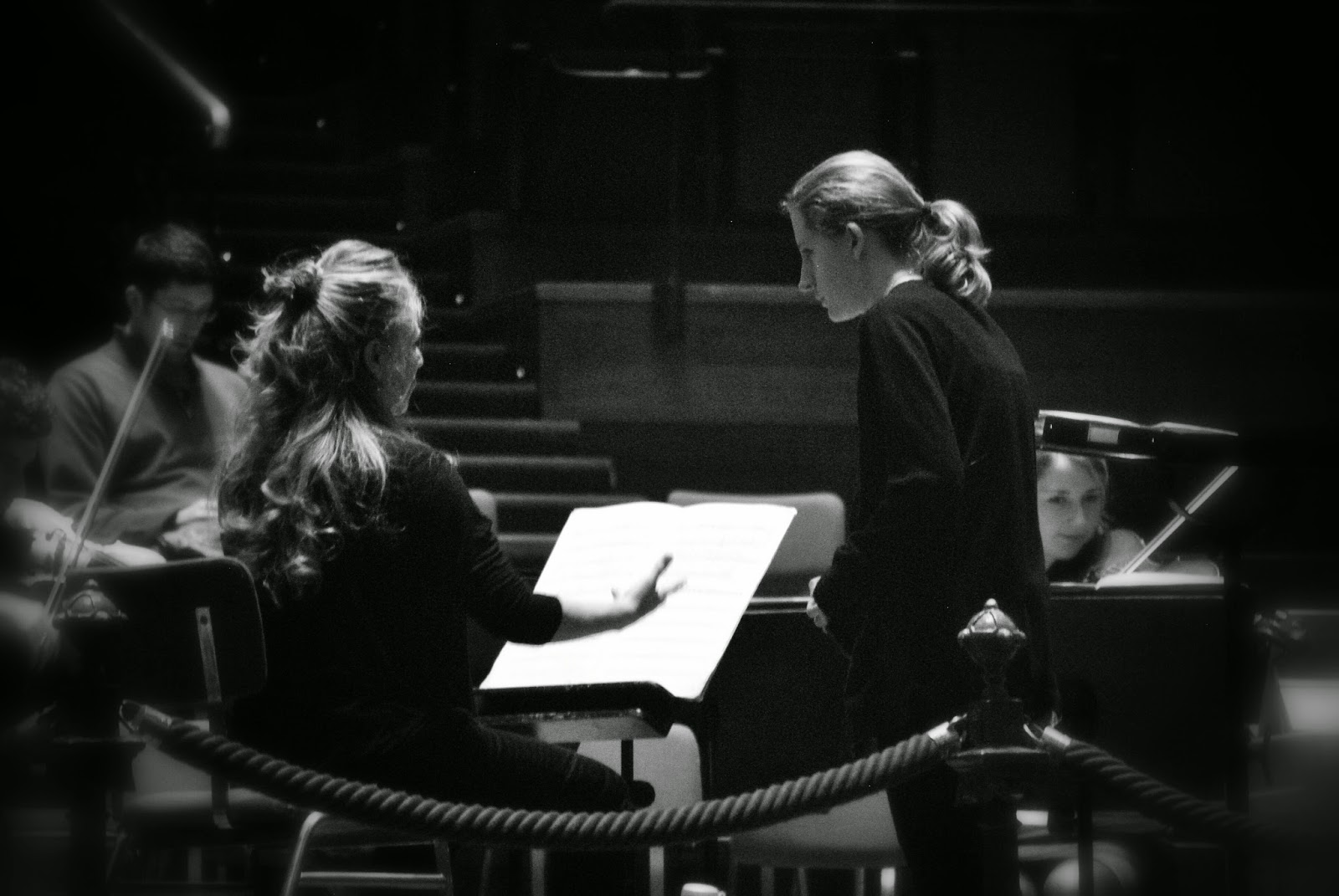 2.15pm: Before we know it, it’s time for the concert to begin. The hall is packed; matinee concerts here are apparently always really well attended, and the audience is both young and old, of all backgrounds. It’s lovely to see such a mix of enthusiastic people, who simply want to come and hear interesting repertoire, played really well. Polyphony are on triumphant form, too – they give an encore (an unaccompanied work by Arvo Pärt, since you ask) at the close of the concert, after which everyone is on their feet applauding.

4.15pm: Backstage after the concert, there’s a palpable buzz about the concert. Everyone knows it went well, and there’s a chance for the concerts team to catch up with some of the players afterwards.

5.15pm: No rest for our indefatigable Orchestra Manager. She’s still got to ship an entire orchestra, instruments and choir back to the UK. So it’s into buses for the journey to the airport. The concert was utterly thrilling – I’m biased but also confident any of the other thousand or so people present would say the same – but for the players there’s no hanging around. It’s back to Blighty to start learning the repertoire for the next concerts. In fact, on the final leg of the journey I asked one if the violinists what the following day had in store. 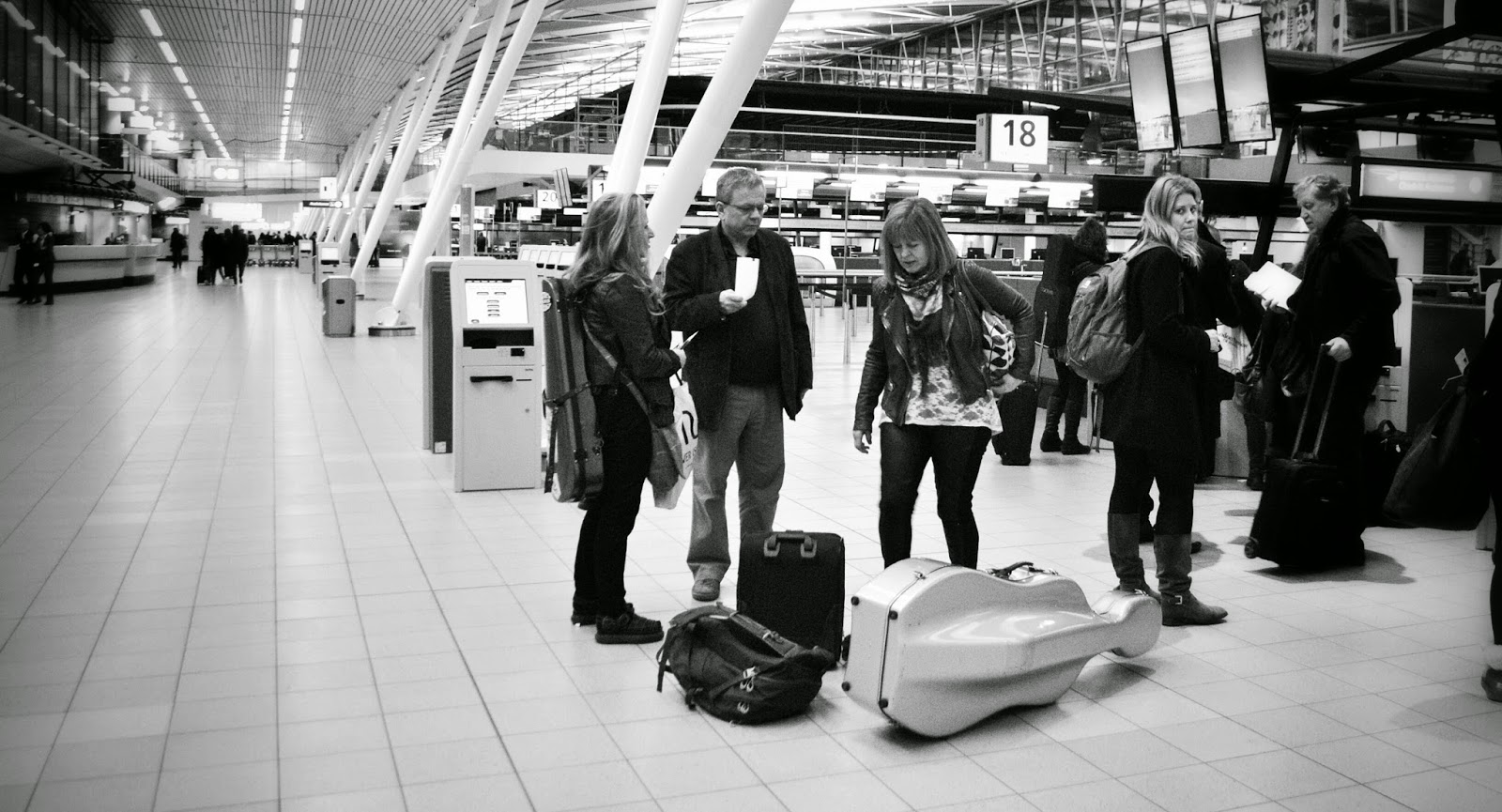 “Well…” she said. “It’s fairly relaxing. Leisurely breakfast, then a few hours of practice, then I’m doing a recording session in the evening in London…”
Posted by Britten Sinfonia at 12:18