Britten Sinfonia’s Lunchtime Concert series came to a flourishing Easter climax* with the ensemble’s performance of varied and fantastic instrumentation. Parallels can be drawn from the contemporary nature of both Lou Harrison and Dmitri Shostakovich, however the success of this
lunchtime concert came in its eclecticism, not its continuity. The two composers, whose works comprised the beginning and end of the recital, were active during a similar time, however their music could not be more dissimilar.

Lou Harrison’s Varied Trio for violin, piano and percussion is a wonderful gem of a piece, with influences from Gamelan music palpable and Native American sounds coming to the fore in Elegy, the central movement. Gould’s playing was sensitive and engaging, remaining particularly accessible as was Watkins' piano interjections in Bell Bowls. The real star of this piece was the fantastic Owen Gunnell, whose playing was virtuosic and displayed consummate technical prowess, remaining involved throughout. Even when playing rice bowls with chopsticks, Gunnell displayed musicianship and ability. The sporadic and broken-up nature of the work was not a hindrance to its effectiveness, rather this added to its charm.

Lost in a surreal trip, on its world premiere tour, by Dutch-born composer Joey Roukens was full of interest and style. Characterised by sharp contrasts in atmosphere and mood, the work began in an ethereal-like haze, and shifted through a pulsating club-inspired sections, to pop induced rhythms, finally to return to the shimmering opening material once more. Again, virtuosity aided the successful evocation of the piece. It is interesting that the extremely eclectic styles exhibited in Roukens' work were aptly reflecting in the altering ensemble size throughout the programme, first with the addition of cello and then with the removal of percussion. Again, Gunnell’s playing was especially sensitive, with his vibraphone technique evoking both intensity and subtlety.

Shostakovich’s second piano trio is a work of sublime intensity, and this was well managed by the trio of Huw Watkins, Thomas Gould and Caroline Dearnley. Written in 1944, in the midst of
WWII, Shostakovich’s composition reflects the tumult of the age, with incredible dissonance in the opening movement, unfolding from the fantastic opening cello solo, entirely in harmonics, convincingly played by Dearnley. The trio was gritty and powerful, while real emotional intensity was realised in the slow movement, effectively a funeral march; the opening piano chords evoke total pain and sorrow, while the violin line weeps with searing agony. 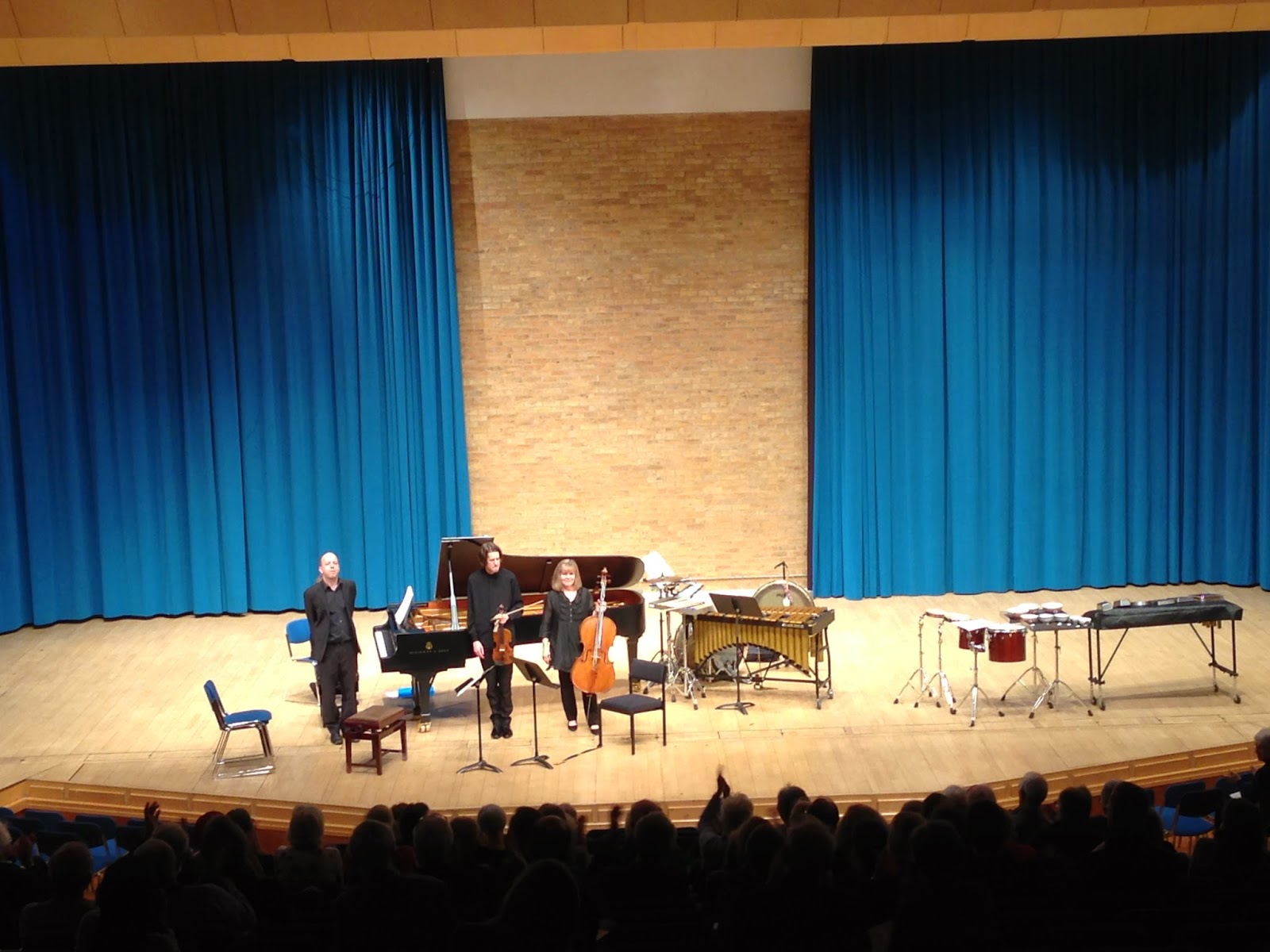 This was the first concert in a long while where members of the audience were visibly reduced to tears it was simply that wonderful, and moving. The final movement was equally persuasive, with Watkins’ playing reaching transcendental heights in his rendition of the Jewish-style ‘Dance of Death’ melody that has become so well-known and widely recognised. A fantastic crescendo was reached towards the end of the finale, concluding a resoundingly superb performance that had audience members captivated and exclaiming their delight come the final few notes. The ensemble’s weight, mettle and intensity was admirable, however the overall sound still required a little more grit in the cello.

This was a wildly persuasive performance, and a hugely enjoyable and engaging one too, reflecting in its repertoire and instrumentation the wide-ranging span of twentieth-century and modern chamber music.

This programme will be recorded in Norwich's St Andrew's Hall on Friday 13 March 2015 for later broadcast by BBC Radio 3.

*The final concert in the 2014-15 At Lunch series will take place on 30 June (West Road Concert Hall, Cambridge) and 3 July (St Andrew's Hall, Norwich) and feature the young musicians from Britten Sinfonia Academy. More information.
Posted by Britten Sinfonia at 13:45