Pianist Dinis Sousa sounds a little worried on the phone. He apologises that he can’t talk for long because he’s in the middle of teaching but he’d like to just run a few things by us.

“With three concerts in one day on the Wednesday?”

“Are we really playing Adès, Bartok and Debussy?”

It is grins all round on Monday morning when five exceptional musicians come together to rehearse Neoma and the Night Time, the concert they will tour with workshop leader Jessie Maryon Davies through Cambridgeshire’s primary schools. The tour will give over 1500 primary school children in nine schools (including two special schools) the opportunity to experience world class performance and explore great music in the kind of programme for which Britten Sinfonia is renowned. Today’s rehearsal venue may be adorned with a giant banana chart encouraging five to seven year-olds to eat their five-a-day, but the atmosphere is all professionalism with such challenging repertoire on the musical menu. 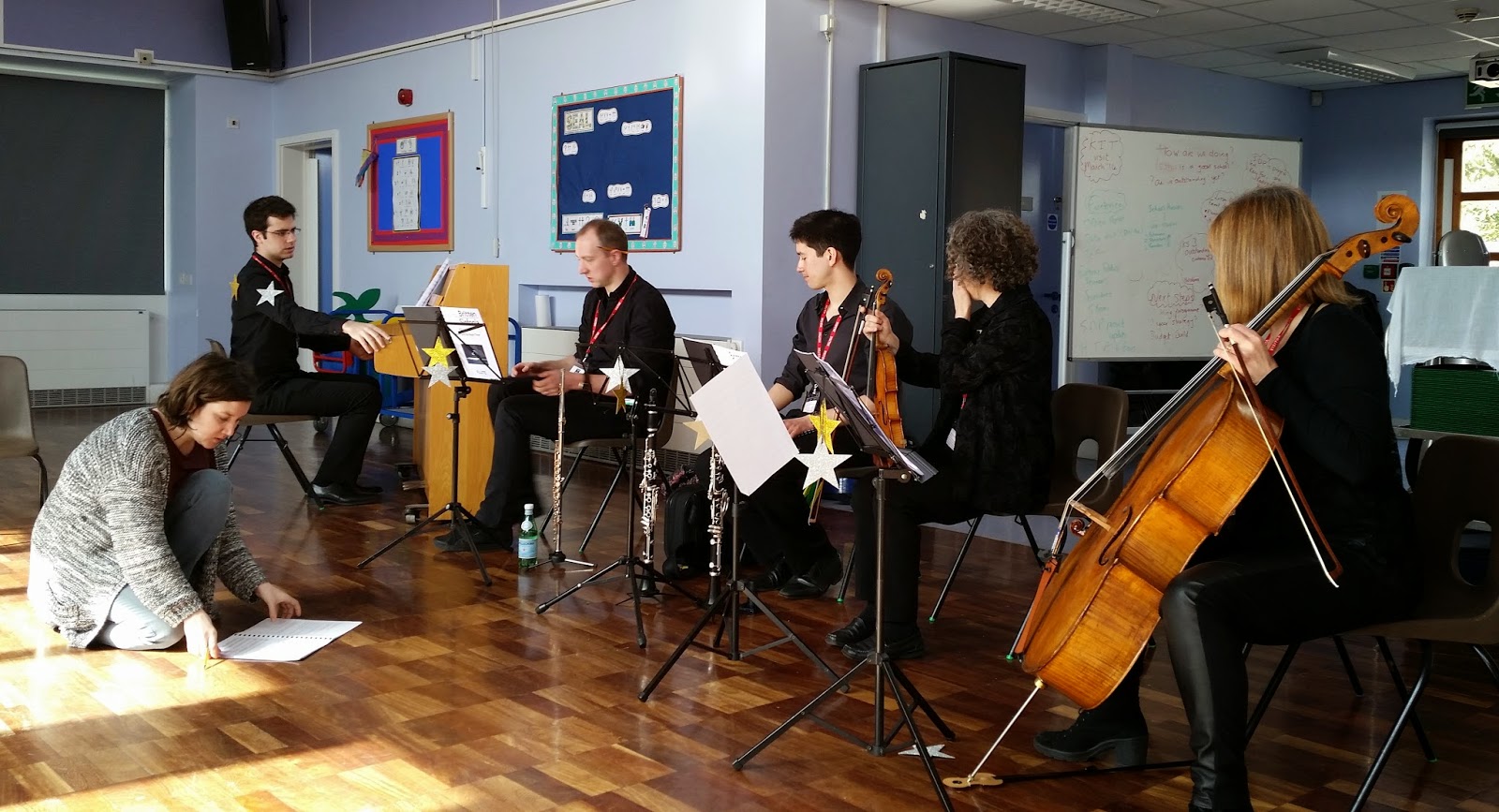 Violinist Ruth Ehrlich suggests they begin with Bartók’s Contrasts. The fast, humorous Hungarian folk rhythms (originally commissioned by Jazz clarinettist Benny Goodman) will represent a mischievous rooster in the concert’s story. Clarinet player Kimon Parry laughs remembering “The first time I looked at this piece with friends at Music College in London we got as far as this third movement and decided it was too hard! We ended up in the pub instead.”

When the moment arrives to play the leaping, fast patterns tossed between clarinet, violin and piano during the performance that afternoon, one hundred and seventy pairs of small eyes widen. The excitement is infectious and a new, technical difficulty of playing the piece presents itself: trying to play the clarinet while smiling! 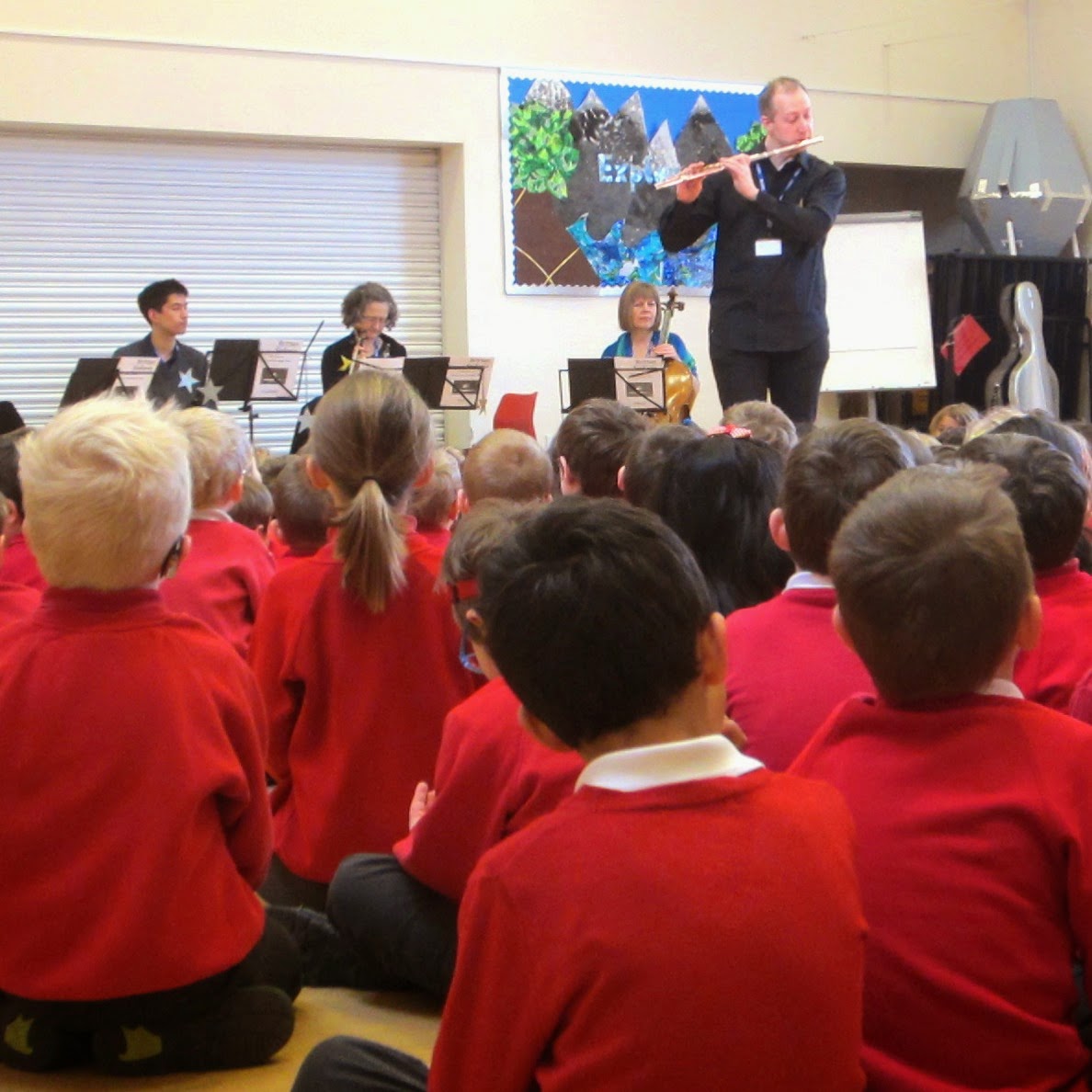 “It’s interesting” notes flautist David Cuthbert, “here you have one of the great cornerstones of the flute repertoire and you’re used to performing it in the hushed, semi-dark of a formal recital. This week I’ll be walking right in among the audience while I play to bring them as close as possible to the music. Their reactions will colour the performance, enhancing the wide range of tones, colours and textures. It really brings it to life.”

The power of the music and the young people’s reactions and engagement with the performances is no more pronounced than at the performances in special schools. At a key moment, children are invited up to conduct the ensemble with a simple series of hand gestures. Carolina is ten and has Fetal Alcohol Syndrome. Her face lights up as the music swells when she stretches her arms out as wide as she can and then suddenly drops to a whisper as she brings her palms in close. She dances on the spot and her delight is mirrored on the faces of the musicians. “It is extraordinary. These children never have the chance to be in charge of anything in their lives and now, in this moment, they do” explains a teacher. “It’s very emotional.” 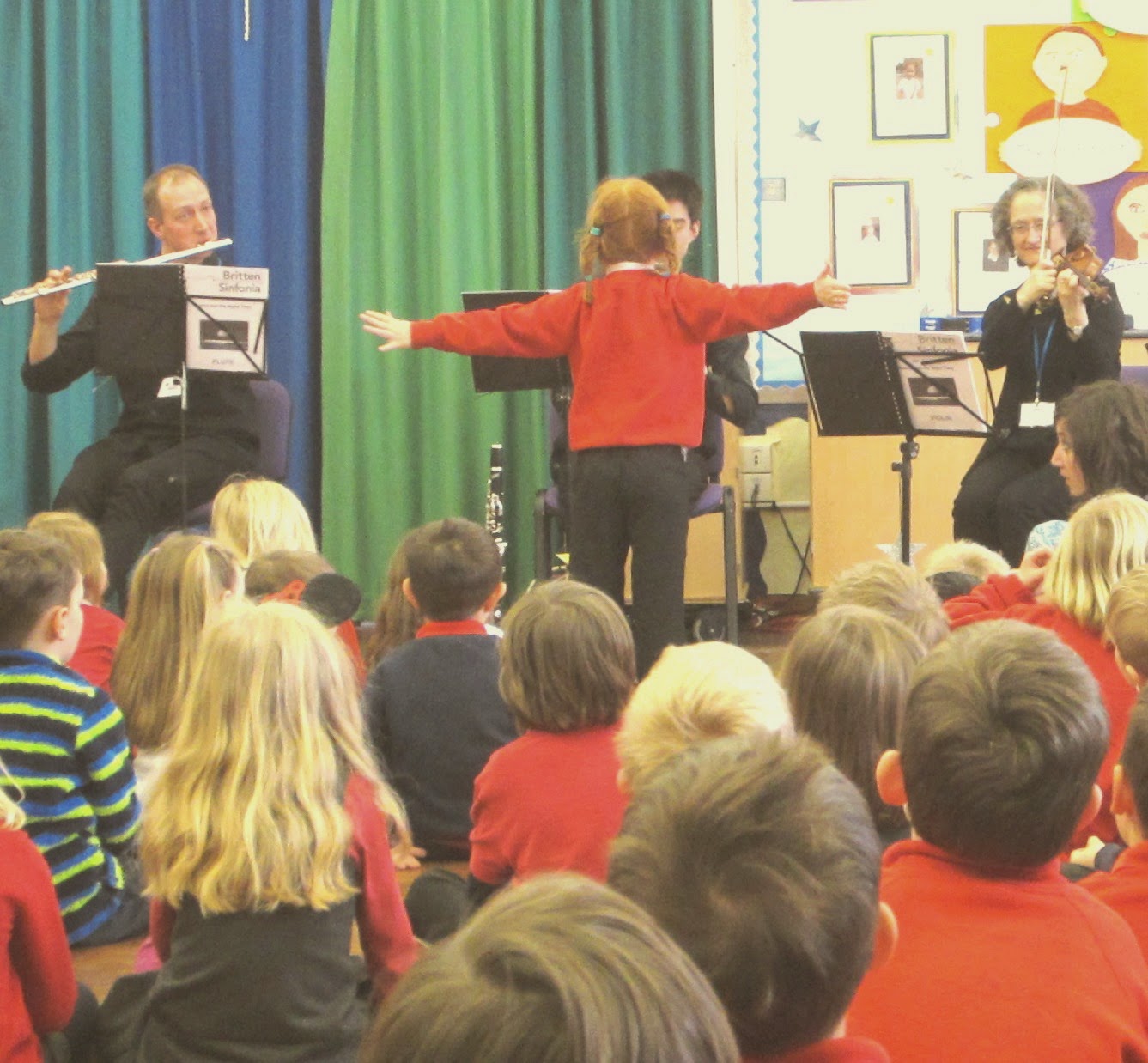 As the story ends, the magic of the performance hangs in the air and children file out under the gentle wash of Debussy’s Clair de Lune. They have found their voices in song, been inspired to lead music themselves and their imaginations have taken flight on backs of the great classical composers.

It is Friday, there is just one more school on the tour schedule and there is a real glow in the Creative Learning office at Britten Sinfonia. We have the good fortune to work not only with some of the best musicians in the UK but we are reminded, not for the first time, that they are also versatile and inspirational torch bearers for a bright future for classical music.

You can find out more about our Creative Learning department and the other work they do on our website.
Posted by Britten Sinfonia at 16:45