A Workshop to Remember - A Sinfonia Student's experience

Having moved to Cambridge from Australia five months ago, I was eager to hear the music currently being written by young composers during the Composers Workshop. It also provided an opportunity to explore the music, and record it under tight time pressures, in an ensemble of Cambridge music students and professionals from Britten Sinfonia.

The workshop began with an address from composition lecturer Richard Causton who spoke, from what was undoubtedly a personal experience, about the journey of a composer’s work: from an imaginary representation inside their head, to the first time they actually hear it played by a real ensemble in real time. He warned the students the experience could be shocking, but it would allow them a unique opportunity to fine tune their composing. Eminent composer, Judith Weir, attended the workshop to give advice to the students. 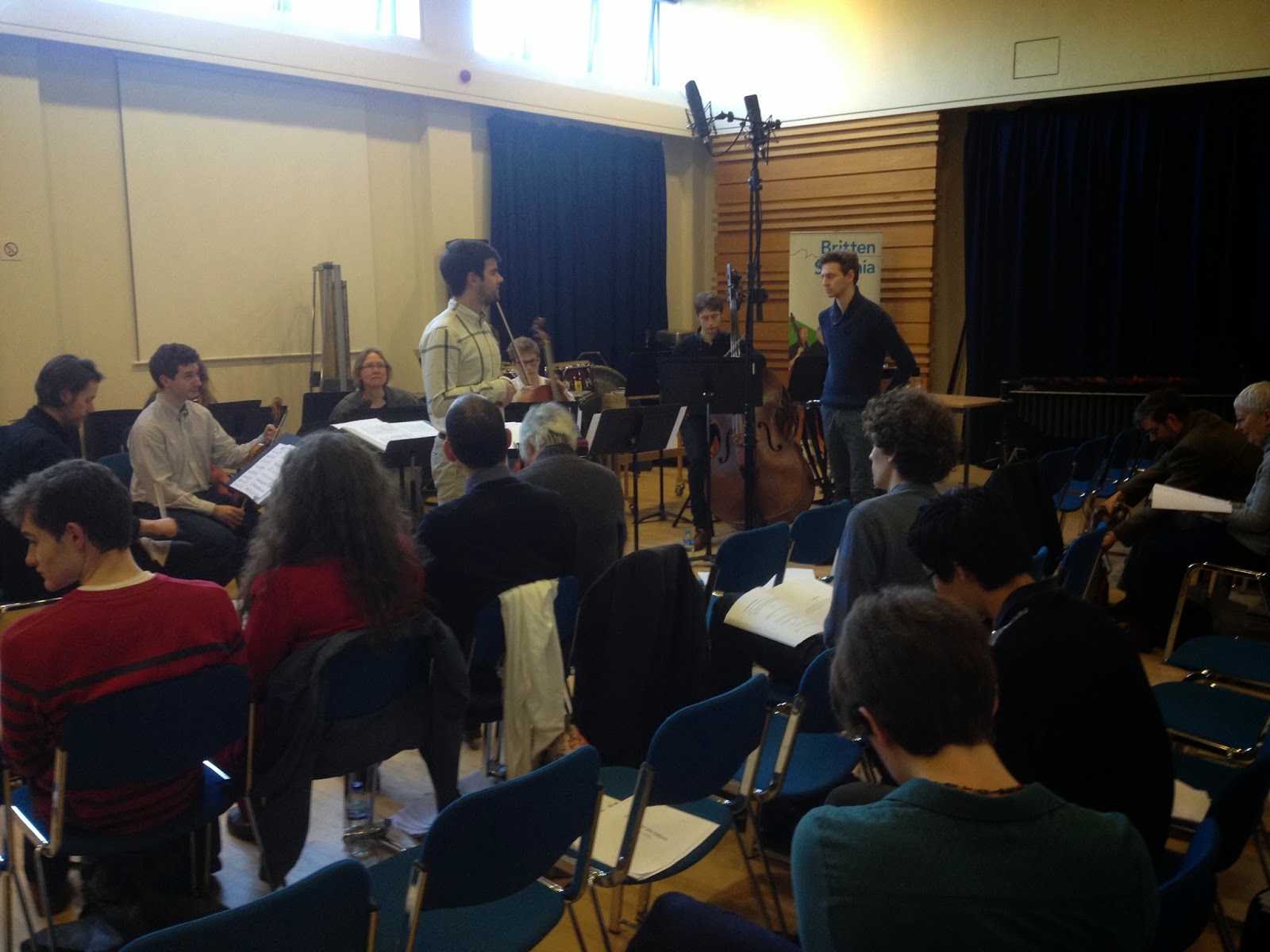 I played flute and piccolo in 4 of the 6 compositions, all of which had a distinctly different style and story. Bertie Baigent’s Mr Hetherington’s Hat for eight players which, in his words, was “inspired by the story of John Hetherington, the haberdasher once supposed to have been the inventor of the top hat… This work captures the atmosphere at the first sight of the hat: the astonishment of the crowd, and the jovial insouciance of Mr Hetherington.” Bertie used very little material for the composition and combined the instruments in groups of unison which were framed with short and punchy silences. As the players and conductor, Hugh Brunt, became more familiar with the score, we began to capture the humourous, light character of the piece. Judith praised Bertie’s exhaustive use of sparse material to create a texturally and rhythmically interesting composition.

In complete contrast was Alex Tay’s The Bleak Winter which “is a reference to the famous carol and poem. The piece draws inspiration from the first verse, where Christina Rosetti describes the earth, winds, snow, and water, and imagines the four separate elements freezing and crystallising.” The score was complexly layered in regards to rhythmic and melodic elements. Tonal and chordal colours were explored through an emphasis on extended techniques across the instruments. The very dense nature of the composition was aided by the structure which featured a recurring section of semiquavers in the flute part. For many of the instrumentalists, this was the most technically challenging piece of the day, although we also appreciated how hard Alex must have worked to conceptualise and notate the music.

Rhiannon Randle’s Nachtgedanken meaning ‘Night Thoughts’, “depicts lying awake at night plagued with insomnia, and tracks a progression of thoughts on life, death and fate.” I had already played this piece prior to the workshop and found it intriguing to see what a different group of musicians could bring in terms of interpretation. Originally conceived as an orchestral work, Nachtgedanken also worked well for chamber ensemble. Judith noted the piece utilised effects more than harmonic or melodic material, which I thought successfully underpinned the dream-like shifts of the piece.. 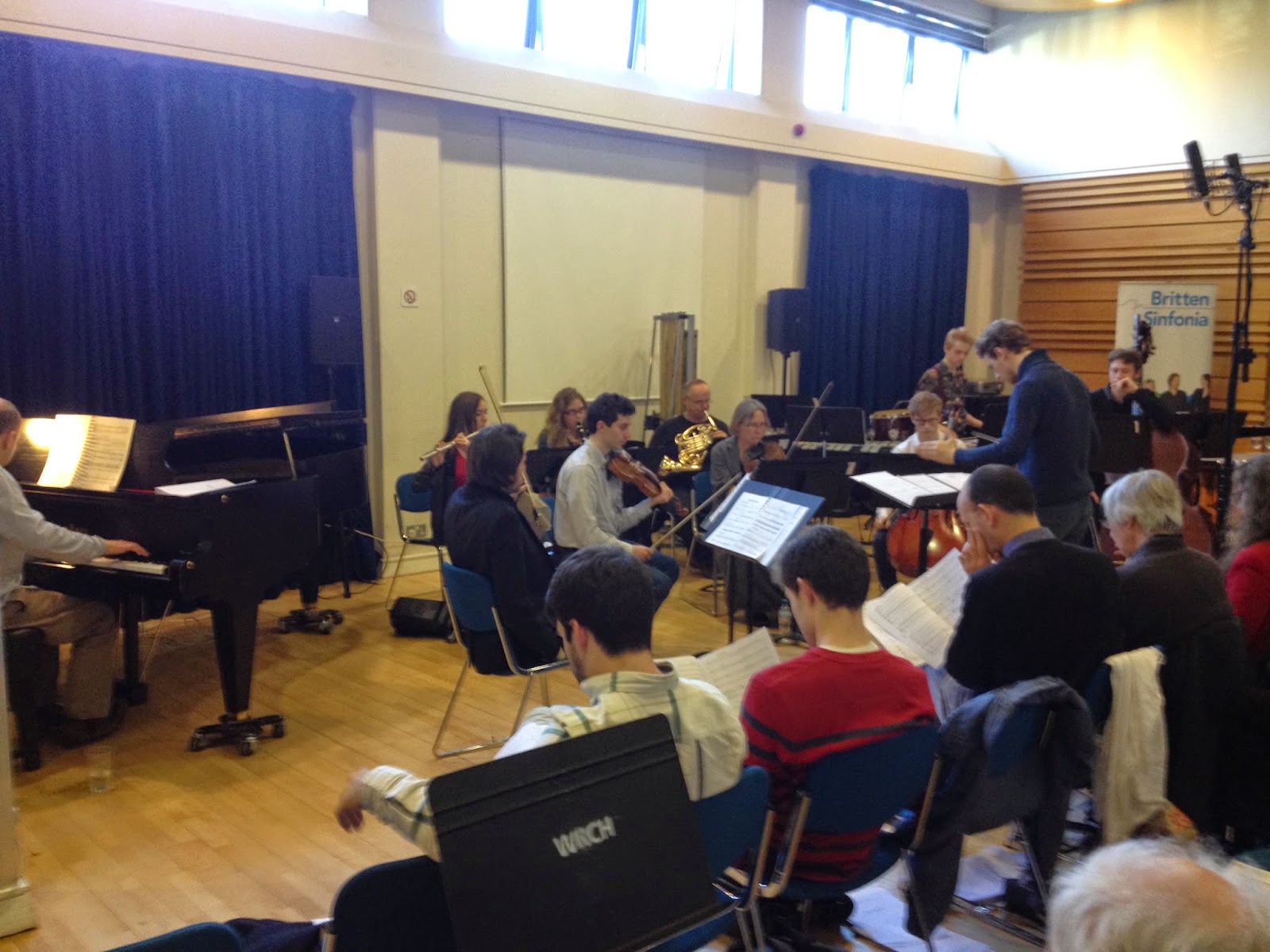 Joy Lisney’s movement I of Sinfonia Piccola is to become a multi-movement small symphony for chamber orchestra which, coincidentally, starts with a lone piccolo note. Much conversation was given to the way in which the piece had been notated. Joy had given a lot of thought as to how she would represent the rhythms across the entire piece. A number of players felt the score looked more difficult than needed and raised some good alternatives to how the notation might be simplified. Initially, I too was troubled by the complex notation, however I realised this was a good opportunity to extend my reading abilities; and that perhaps sometimes notation should challenge the musician. Once I took on this mindset and worked out the subdivisions, I felt I had a better understanding of the piece.

In the last hour of the workshop, we gave a concert of all the pieces which were also recorded. This was a demanding process as there was little time to prepare between each piece. Hugh must be commended for not only his preparation of the scores before the workshop, but for his ability to change from the character and style of one piece so quickly to the next. This gave me the opportunity to hear the other two compositions that didn’t require flute. Robert Laidlow’s Traveller of the Inferno incorporated extended string techniques which had me craning my neck to see where the sounds were coming from. Daniel-Lewis Fardon’s Break juxtaposed material for solo cello against the rest of the ensemble, and was perhaps my favourite composition of the day. Credit must go to Ben Michaels for his virtuosic cello playing.


Overall, the workshop was a huge success for the composers, ensemble, and audience. It is satisfying to hear such contrasting music being written by young composers in Cambridge.

The winner of the 2015 Composers Workshop will be announced on our website www.brittensinfonia.com in mid-April.
Posted by Britten Sinfonia at 10:42