The concert hall is the natural home of the orchestra and although Britten Sinfonia regularly perform in alternative spaces (Latitude, Colchester Heritage Weekend etc) the concert hall is where we are more than likely to be found. During January the orchestra will be performing in many concert halls throughout the UK (Cambridge’s West Road Concert Hall, Wigmore Hall, Birmingham Town Hall) and also the Netherlands. However, perhaps the two most iconic music buildings we’ll be playing in this month are London’s Roundhouse followed by Amsterdam’s Concertgebouw. What makes these buildings so special though?

The Roundhouse started life as a Victorian steam engine repair shed before becoming the legendary cultural venue it is today. It was first used as an arts venue in 1964 when playwright Arnold Wesker established Centre 42. In 2006 following extensive refurbishment the Grade II listed building was opened as one of the major venues in London and since then has hosted the BBC Electric Proms, James Brown, Paul McCartney and Jarvis Cocker amongst others. Although not a traditional concert hall, this month the Roundhouse hosts Reverb, a series that explores the many sides classical music. Reverb is about introducing new audiences to classical music and breaking down the barriers that exist for audiences. 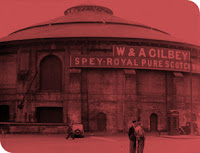 The final date of Britten Sinfonia’s tour to the Netherlands is the orchestra’s debut performance at Amsterdam’s Concertgebouw. Literally meaning concert hall, the Concertgebouw is considered one of the finest concert halls in the world. Bernard Haitnik once described Concertgebouw as the best instrument in the orchestra it houses. This must have been what the great and the good of Amsterdam had in mind in 1881, when they decided that the Dutch capital should have a proper concert hall worthy of the name. Seven years later, in the marshy fields just outside the city limits, there stood a wonder of neoclassical architecture, the Concertgebouw. Acoustics were something of a black art (some may say they still are) so when the Concertgebouw was built designers drew upon what had worked in the past without entirely understanding the underlying science. When the building was completed, the acoustics were not perfect, and a lot of effort went into fine-tuning the aural ambience. During later restorations, particular care has been taken not to alter the materials used for interior decoration with this in mind. The building now enjoys a worldwide reputation.

We’re very much looking forward to performing at both of these venues. At the Roundhouse on the 23rd January we’ll be joined by pianist Joanna MacGregor - find out more here. Then on the 24th January (also at the Roundhouse) young American composer, Nico Muhly will direct and perform Britten Sinfonia in a programme of his own compositions alongside works by Steve Reich and Philip Glass - find out more here. On 31st January Britten Sinfonia perform a programme of music from both sides of the Atlantic at Amsterdam’s Concertgebouw including music by Purcell, Tippett, Britten, Steve Reich, Nico Muhly and John Adams - find out more here.