Last weekend, Britten Sinfonia Academy performed as part of the Fitzwilliam Museum’s Sunday concert series.  Britten Sinfonia Academy is a new ensemble giving young classical musicians from the East of England an opportunity learn and develop their chamber skills alongside some of the UKs top chamber musicians. In addition to performing at the Fitzwilliam, the ensemble were resident in the museum for the weekend, giving more time for the young musicians to explore the museum and to explore the context and relevance of its artifacts to their music.


"Last weekend Britten Sinfonia Academy made their way to the Fitzwilliam Museum for rehearsals, which culminated in a concert on Sunday afternoon. On arrival on Saturday morning, we started to rehearse some small ensemble work in the grand spaces available to us in the museum. We ran through and refined previously rehearsed works during the morning, and progress was greatly enhanced by the discovery of the kettle midway through the morning! We worked especially on Stravinsky’s Suites for Small Orchestra throughout the day, for which we came together as a large ensemble.
In the afternoon we were guided on two tours around the museum, in which we studied paintings from the time of the composers of our works, to give us context on the music that we were preparing to perform. I think everyone found that this helped us to find character in our pieces, and I was surprised at how much that I learnt on these tours. 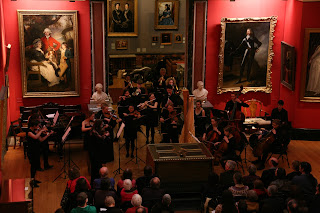 After battling through hoards of keen participants in the Cambridge Half Marathon on Sunday morning, rehearsals commenced with final tweaks being added to our performances. We made the long trek upstairs to the gallery where we were to perform with our instruments in the early afternoon, after eating far too much cake in our break beforehand! The hall was full for our performance, with spectators even gathering at the back of the hall to get a glimpse of the chamber music that we were presenting. Everyone really enjoyed performing in the concert, and felt that all of the pieces ran smoothly. The concert ended with an arrangement of Piazzolla’s Oblivion, which was rehearsed and performed solely by members of the Academy."

To find out more about Britten Sinfonia Academy click here 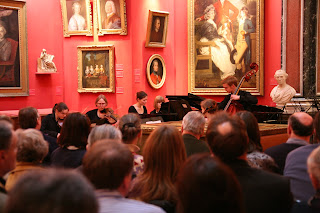 Posted by Britten Sinfonia at 16:33 No comments:

We recently conducting our 2013 audience survey. A big thank you to all who completed the survey. It is now closed to respondents and we're busy analysing the results. In the meantime we've created a couple of wordles (word clouds) drawn from the responses to a couple of the questions in the survey. Not only are wordles quite pretty they also make for an interesting way of presenting information as they give greater prominence to words that appear more frequently in the source text.

Do you have any other comments about the last Britten Sinfonia concert you attended?

Do you have any further comments about Britten Sinfonia and its work?

If you click on the images above you'll be able to see larger versions.
Posted by Britten Sinfonia at 16:01 No comments: