Virtuoso violinists throughout the centuries have arguably, more than any other instrumentalists, achieved a ‘god-like’ status with the public. From the Italian Paganini in the 1800’s described as the first Romantic virtuoso, to Nigel Kennedy, who today is not only famed for his interpretation of Vivaldi’s Four Seasons but his work with musicians from other genres - violinists have both enthralled and entranced audiences with their brilliant technique and golden tone.

This October we will be exploring the artistry of not one but two violinists. We will be touring with Norwegian violinist, Henning Kraggerud who will performa specially commissioned work by British composer Piers Tattersall which explores the style of Fritz Kreisler – an Austrian violinist and composer of the early 20th century..

Henning is an artist of exquisite musicianship, who combines an unusually sweet tone and beauty of expression with impressive virtuosity, drawing audiences and critics alike towards the genuine quality of his playing. This summer, on tour in Mexico, Henning and Britten Sinfonia players established a great rapport with Henning and are looking forward to performing with him for our regular audiences in Norwich, Cambridge and London.

Part of the programme is a new work by the young composer Piers Tattersall. In the process of writing this new piece Piers and Henning discussed in great detail how the new work would develop and what the inspirations behind it were. Entitled Kreisler, l’entre deux guerres the work is informed by elements of the life and music of Kreisler. Perhaps the most popular violinist of the early 20th century Kreisler was known for his expressive sweet tone and brilliant technique. He played in what has often been described as a ‘cosy’ style and had a taste for ‘pastiche’. In the 1930’s Kreisler caused controversy when he admitted that a number of pieces he’d published which he’d ascribed to other composers (e.g. Vivaldi, Couperin and others) were in fact his own compositions. Kreisler answered complaints by declaring that critics had already deemed the compositions worthy and he explained his motive was to build well-rounded programmes for his concerts that would contain virtuoso pieces by established composers, rather than a series of pieces under his own unknown name.

Piers Tattersall’s Kreisler l’entre deux guerres is commissioned by Britten Sinfonia with support from the William Alwyn Foundation and additional funding from the RVW Trust. For more information about the concerts click here. The première will take place at Norwich Theatre Royal on Sunday 2 October and then tours to Cambridge’s West Road Concert Hall on Wednesday 5 October and London’s Southbank Centre on Friday 7 October.
Posted by Britten Sinfonia at 12:24 No comments:

Read All About Red!

A Britten Sinfonia quartet consisting of Miranda Dale, Alexandra Reid, Sarah-Jane Bradley and Caroline Dearnley performed with singer-songwriter Emma Salokoski and guitarist / theremonist Jarmo Saari as part of the London Design Festival last week. The red dress designed by Aamu Song and Johan Olin is made up of 550 metres of plush red fabric and appeared in London for the first time as part of a series of events promoted by the Finnish Institute; eerily, but beautifully transforming the interior of the 1930s music hall, York Hall in Bethnal Green. 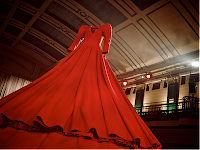 The dress, which has become a national treasure in Finland has appeared at several European venues including the Design Museum in Helsinki (2007), the Ourfestival in Tuusulanjärvi, Finland (2008), Elizabeth Church in Designmai, Berlin, Germany (2008) and Muziekgebouw Frits Philips, Eindhoven, Netherlands (2010). 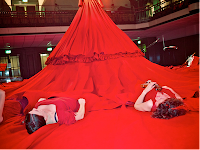 Audience members experienced the hour-long concert from pockets around the skirt of the dress, the bodice of which was raised above floor level seamlessly rotating and pivoting as Emma delivered her performance of a number of Nordic tracks.

Highlights included a new piece entitled ‘Red’ written by Lauri Salokoski, Emma’s brother and a number of other tracks, some with ancient Finnish lyrics, many of which had been arranged to feature string quartet, previously performed at the Lake Tuusula Chamber Music Festival, curated by virtuosic violinist Pekka Kuusisto. 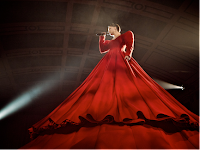 Britten Sinfonia got into the red spirit, dressed completely in red, with the addition of a rather fetching red hairpiece on the final night. 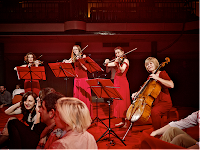 Events concluded with a red cocktail at a trendy East London bar. Certainly not an event to be forgotten and hopefully the beginning of a long lasting friendship with this inspirational team of artists. 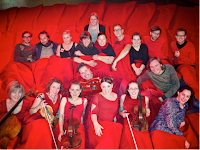 Many thanks to all involved, especially Hanna Harris and Suvi Saloneimi at the Finnish Institute. 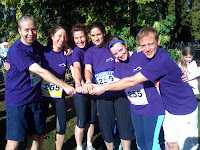 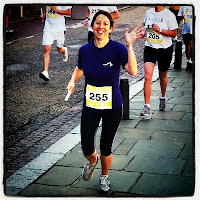 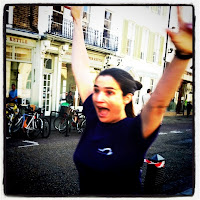 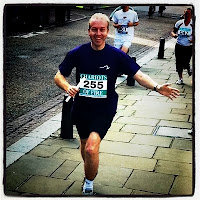 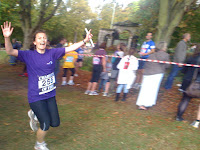 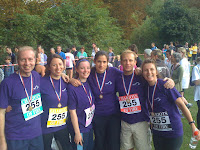 Hannah Perks
Marketing and Development Assistant
Posted by Britten Sinfonia at 12:56 No comments:

A View from a Musician

As the start of the 2011-12 season draws closer Principal 2nd violinist Miranda Dale talks about what its like to be a member of Britten Sinfonia.

Why Britten Sinfonia? For me it’s been the orchestra which has mirrored my career: as I left full-time musical education Britten Sinfonia was formed and our long-term musical affair began nearly 20 years ago. Since then we have achieved so much - our programming now stands firmly at the cutting edge of the international music scene and we are now touring extensively throughout the UK and internationally. This season we make our debut in both Dublin and New York both of which I am much looking forward too. The thrilling development of Britten Sinfonia has kept me inspired as a means of expressing myself both musically and personally.

Not a project goes by when we are not being stretched to capacity in some respect. Whether learning new techniques such as historically informed performances of Messiah, collaborations with some of the finest jazz or world musicians, or giving world premieres of new works by both established and up-and-coming young composers, each project involves a new and exciting challenge. I should at this point probably give further examples of musical genres which we are required to embrace but the beauty of Britten Sinfonia, I feel, is that there is no need to differentiate or categorise, music is just music!

All this clever programming and marrying together of like-minded international artists would not work, however, if the orchestra were not run in such a transparent and communicative way. In some respects we are all (musicians and management alike) artistic directors of Britten Sinfonia which is what makes us unique. I can think of numerous occasions over the years when I’ve had ideas about artists, players or the orchestra and have freely approached David Butcher, our Chief Executive, to be met with an enthusiastic response. Any problems are also handled with similar gusto and with a willingness to listen and act. In my opinion everybody pulls together, board members, management team and orchestral players to bring a dynamic, fresh approach to the modern chamber orchestra and the wonderful world of music.
Miranda Dale

Miranda will be leading the 2nd violins in the first concerts of the 2011-12 season which feature Norwegian violinist Henning Kraggerud in music by Mozart, Schubert, Berio and a new work by Piers Tattersall.

Posted by Britten Sinfonia at 14:52 No comments: