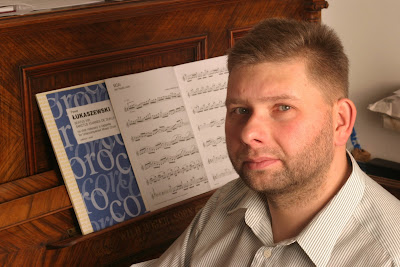 We have two projects in the coming weeks which include the music of the Polish composer Paweł Łukaszewski.

First, some biographical background: born in 1968, Paweł is a graduate of the Fryderyk Chopin Music in Warsaw, where he studied the cello (with Andrzej Wróbel) and composition (with Marian Borkowski). He also studied at the School for Arts Management at the University in Poznań and took the postgraduate course in choral conducting at the Music Academy in Bydgoszcz. In 2000 he received a Ph.D. in composition.

He won the ‘Fryderyk’ Award of the Polish Phonographic Academy in the ‘vocal music’ category (2005) and the Award of the town of St Quentin at the Concours Europeen de Choeurs et Maitrises de Cathedrales (2006).

He has received the Commander’s Cross of the Order of Polonia Restituta (1998), the award of the Mayor of Częstochowa for outstanding compositional achievements (1995) and the Saint Brother Albert Chmielowski Award (2006).

His works have been performed in many European countries (Britain, Belarus, Belgium, the Czech Republic, Denmark, France, Germany, Iceland, Italy, Lithuania, Luxembourg, Malta, Monaco, Romania, Switzerland, Ukraine, the Vatican), as well as in Argentine, Chile, China, Israel, Cuba, Canada, South Korea, Moldova, Peru, Uruguay and the United States. He has worked as a visiting professor in Chile and Argentina, also performing as a conductor in these two countries. He is Artistic Director and Conductor of the ‘Musica Sacra’ Choir of the Warsaw-Praga Cathedral.

Building on our residency in Krakow, Britten Sinfonia has commissioned Concertino from Paweł Łukaszewski for our At Lunch series in March. Featuring our brass players, it gives us an opportunity to introduce this intriguing composer to wide audience in the UK. Later next month we perform his large-scale work for choir and orchestra Via Crucis , with Polyphony and Stephen Layton. More information will appear in our digiSpace on these concerts.
Posted by Britten Sinfonia at 09:11 No comments:

Polyphony and Britten Sinfonia on Radio 3 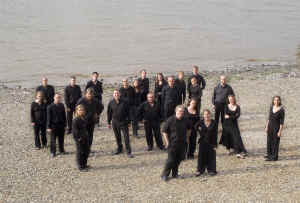 We next work with Stephen Layton's Polyphony at the end of March, but you might like to listen to yesterday's The Choir on BBC Radio 3, which was exclusively devoted to them. It features several tracks from CDs Britten Sinfonia has recorded with Polyphony, including works by MacMillan and Lauridsen, and previews our next joint Hyperion release, of works by Poulenc.
Posted by Britten Sinfonia at 09:29 No comments:

‘A short story is always a disclosure, frequently an evocation.’ Victor Sawdon Pritchett, from his preface to the Oxford Book of Short Stories 1981

‘Not that the story need be long, but it will take a long while to make it short.’ Henry David Thoreau, in a letter from 1857

Brett Dean introduces his note on his work Short Stories - which Britten Sinfonia premieres in the UK in the coming week – with these two quotes, hinting at his own thoughts in the piece.

A composer and viola player, Brett studied in Brisbane before moving to Germany in 1984 where he was a permanent member of the Berlin Philharmonic Orchestra for over 15 years. He returned to Australia in 2000 to concentrate on his growing compositional activities, and his works now attract considerable attention, championed by conductors such as Sir Simon Rattle, Markus Stenz and Daniel Harding. One of the most internationally performed composers of his generation, much of his work draws from literary, political or visual stimuli.
Posted by Britten Sinfonia at 21:44 1 comment:

There's an excellent review by Richard Morrison in today's Times of our Wigmore Hall performance of Robin Holloway's Five Temperaments, and an equally good one by Michael Church in The Independent.
Posted by Britten Sinfonia at 08:20 No comments:

Music and Business: an exploration

What, you might well ask, were some 30 representatives of businesses and cultural organisations doing working with three of our players in the Radisson SAS hotel in Krakow on Sunday evening? Nicholas Daniel, Joy Farrell and Sarah Burnett stayed on after our lunchtime concert to launch the pilot of our new Music and Business programme, devised by our Creative Learning Director, Sophie Dunn, together with two outside facilitators, the business consultants Howell Schroeder and Sara Howe.

Businesses have much to learn from arts organisations and musicians: some fields of interest are obvious on the surface, such as creativity, leadership and ensemble. But the session demonstrated that there is two-way traffic, and many challenging ideas emerged about management, control, listening and complexity.

The workshop was organised locally by South Poland Business Link, with sponsorship from AG Test HR and the Radisson SAS hotel.

We will be doing more of these sessions in the coming months in both Poland and the UK.
Posted by Britten Sinfonia at 09:59 No comments: