Reflections on the Serenade project 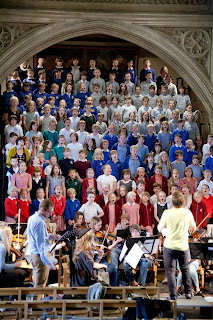 Earlier this year we worked with worked with seven Norfolk primary schools to compose and perform a brand new song cycle inspired by Britten's Serenade for tenor, horn and strings. The songs were performed by the children and Britten Sinfonia at Wymondham Abbey in June interspersed with Britten's own work, featuring tenor Robin Tritschler. The children then revived the songs for a performance during a pre-concert event at Norwich Theatre Royal in November. Here are some reflections on the project from two teachers;

"John who came to work with the class to compose the words and the music was brilliant. I saw children who would never give anything of themselves desperate to shout out a word they had thought of. The children were all engaged, focussed and keen to work.

Back in the classroom the children enjoyed learning to sing the songs, especially the piece that they had composed. Singing in Wymondham Abbey was inspiring. Most of the children had never been in the building before and were amazed at the structure. Working with the professional musicians was also very insightful. The children who play violins could see where all the practising would get them. Also the musicians were so approachable and seemed genuinely to enjoy working with the children. Singing together was inspiring and amazing for me and the children.

It is hard to quantify how the experience has impacted on the class. It is almost impossible to measure but I believe it will have a lasting impact on the children. The whole experience was inspiring, wonderful, creative, for some of the children it gave them an insight into what was possible, and what they could do in the future."
Class Teacher

"Most of the children that I work with have never had the chance to work with professional musicians in any long term project or large-scale performance.  The children were exposed to musicians in their classrooms and this was in itself an inspiration to them.  It made high quality musical professionalism accessible and very real and it showed to them that it is something that they can aspire to as well.  It is interesting to note that since the project some of the children have taken up tuition on string instruments including the double bass.

The experience of taking part in a large-scale performance was invaluable in terms of building the children's confidence and inspiring them to do something they had never done before.  There were children in my particular group who were terrified when it came to the first performance.  One or two were so nervous they actually cried with fear.  They were inspired and encouraged in such a great way by the personnel from Britten Sinfonia and reached heights they never felt they could.  It is also interesting to note that when they performed in the Theatre Royal they were much more confident and did not exhibit the same fear."
Class Teacher

This project was funded by South Norfolk Council, with additional support from Orchestras Live.
Posted by Britten Sinfonia at 10:25 No comments: