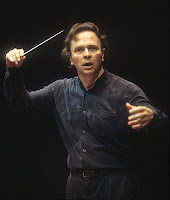 Posted by Britten Sinfonia at 10:47 No comments:

In December we'll be performing Berlioz's L'enfance du Christ in London, Cambridge and Brighton. Mezzo-soprano Sarah Connolly will be performing in our cast of soloists under the baton of Sir Mark Elder. In our regular series of Q and A's Sarah answered a few questions;

What has been the highlight of your career so far?
Mahler 2 with Riccardo Chailly and the Leipzig Gewandhausorchester.

When are you happiest?
When singing with responsive musicians or at home, playing with my daughter.

What is your greatest fear?
Generally, fearing for my daughter's safety. Musically, forgetting my words!

What is your earliest musical memory?
Improvising nursery rhymes at the piano and discovering infinite possibilities.

Which living person do you most admire, and why?
The Dalai Lama. "Love is the absence of judgement". "Tragedy should be utilized as a source of strength. No matter what sort of difficulties, how painful experience is, if we lose our hope, that's our real disaster".

If you were an animal what would you be?
A female wolf.

What is your guiltiest pleasure?
I'm not telling ! Second guiltiest ? Chocolate.
How do you relax away from the concert platform?
A glass of wine, a bath, reading a story with my daughter.

What do you consider your greatest achievement?
Giving birth to a wonderful child.

What is the most important lesson life has taught you?
Don't take anyone for granted and be kind.


Posted by Britten Sinfonia at 14:54 No comments:

A New Addition to the English Choral Tradition

We're busy organising our next major project - performances of L'enfance du Christ with Sir Mark Elder. These concerts will mark the debut of our new vocal enxemble, Britten Sinfonia Voices and takes place in London, Cambridge and Brighton. Below Eamonn Dougan, Chorus Director of the new ensemble talks about the new chorus;

In England we are fortunate to have a choral tradition which has continued uninterrupted for hundreds of years. The cathedral and collegiate traditions continue to contribute many into the profession who are equipped with skills which will stand them in good stead throughout their careers, while institutions such as the National Youth Choirs of Great Britain continue their tireless and inspirational work in developing young singers of all ages. Choirs and choral works hold a special place in our affections and interests as a nation, something which is not limited only to those who regularly attend classical concerts. With television series such as the BBC’s Sacred Music and the recent recording by I Fagiolini (Britten Sinfonia collaborators at the 2010 BBC Proms) of a long lost Italian renaissance masterpiece claiming a place in the pop charts no less, choirs remain very much on our musical and cultural radar..

This season will see the inaugural performances by Britten Sinfonia Voices, the new regular chorus of Britten Sinfonia. The chorus will be made up of a mixture of emerging talent alongside more experienced singers – a combination in keeping with Britten Sinfonia’s ethos, so that the next generation of performers are cultivated by learning from those around them.

The initial two projects are seasonal favourites. First up in December is Berlioz’s sacred trilogy L’enfance du Christ with Sir Mark Elder. A dramatic depiction of Herod’s dream of a child who will overthrow him and Mary and Joseph being warned by angels to flee to Egypt forms the first part. Part 2 is their flight into Egypt (including the perennial favourite The Shepherd’s Farewell) and the trilogy culminates with their safe arrival and an appropriately heavenly final chorus. This will be followed in the same month by performances of Messiah, including a debut for the chorus at the Concertgebouw under the direction of David Hill.

These two works provide a wonderful platform from which to launch Britten Sinfonia’s own in-house chorus. While travelling on the tube recently I was confronted by a poster of Sir Mark Elder telling me that there are many ways to perform a piece of music, but one should never play it safe. This maxim will be at the forefront of my mind when we start rehearsals and will be one which we will aiming to keep to in the projects that lie ahead.

Posted by Britten Sinfonia at 09:50 No comments: