Photos from the last 20 years

Here's a selection of photos from the Britten Sinfonia archive from the past 20 years;

Posted by Britten Sinfonia at 12:57 No comments:

On a hot, sunny September Saturday (yes, its only weeks since t-shirt weather!), Britten Sinfonia’s Creative Learning department arrived at Colchester’s Firstsite gallery for a morning of creative music-making workshops.  Armed with a van-load of instruments, we set up camp in a lovely curved room overlooking the lawn and welcomed three groups with people of all ages as workshop leader James Redwood guided us through rhythm and group composition games.  Some participants brought their instruments; others just their enthusiasm and willingness to pick up a drum, shaker or xylophone and chime in.  We even had the mayor of Colchester join in!

Using the gallery, and the juxtaposition of old/new and rural/industrial found in the town around it as inspiration, members of the public, assisted by Britten Sinfonia musicians Ali Reid (violin), Andrew Webster (clarinet) and Adam Mackenzie (bassoon) composed short pieces and performed them to one another.  These pieces can be heard by following the links below:

The Music of Place was a collaboration between Britten Sinfonia, Orchestras Live, Colchester Borough Council and Colchester Arts Centre.

Posted by Britten Sinfonia at 15:09 No comments: 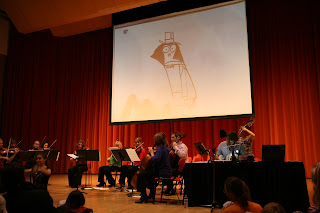 Last weekend Mr Big visited Cambridge and made lots of new friends! Children and their families came along to West Road Concert Hall and enjoyed our interactive family concert presented by Hannah Conway. The performance featured live illustrations on stage from Mr Big's author, Ed Vere. Below you can see some photos taken at the performances as well as some of the fabulous feedback which we have received.

"...having Ed Vere there was wonderful – to see him create his beautiful drawings was really special."

"My little girl and I were spell bound. Hannah Conway was totally and utterly brilliant and couldn’t be a better role model for any child."

"I brought my two boys, aged 4 (just) and 5 ½ and they were fully engaged for the entire production." 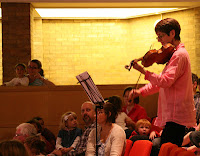 "One of the fantastic violinists even stopped and let Abigail ‘play’ – it was incredibly kind."

"a huge THANK YOU to you all for such an amazing concert."

If you came along to one of our Mr Big concerts and would like to let us know your thoughts please complete our feedback form here.
All photos copyright Isobel Timms.
Posted by Britten Sinfonia at 14:01 No comments:

Running around the world with Britten Sinfonia

We've been asking our players what the highlights of touring with Britten Sinfonia have been over the past 20 years. Here Miranda Dale talks about activity away from the concert platform and her passion for running;

Alongside the wonderful memories of exciting programmes; fabulous playing experiences; exotic destinations and interesting concert venues there is a different side to touring which a few of our musicians delve into in varying degrees but once tasted find it hard to give up, namely "running".

There are a few of us in Britten Sinfonia who enjoy the 'antidote of touring' and will don trainers at any given opportunity. Take the great turn out (including Chief Exec David Butcher) in Central Park, New York, last year when a team of jet-lagged joggers stormed onto the American scene delighting in the blue sky and sunshine which greeted our only morning in the Big Apple! Once around the reservoir and after an hour's excercise still in time for a pancake and maple syrup breakfast.

David, a keen competitor in the yearly Chariots of Fire relay race around Cambridge which usually stirs up a fine team of office staff and players (unfortunately thwarted by a trip to Oslo with Jaga Jazzist this year) often joins the joggers and indeed was with us for our "altitude training" in Mexico during our trip with Joanna MacGregor. Reaching the parts that others sometimes don't, we happened upon the most beautiful flower festival in Morelia where the half mile path up to the local church was covered in mosaics made from fresh flowers including a 'Tower Bridge' especially for the Anglo-Mexican festival.

Indeed, finding unusual things in unexpected places is a trait for the jogger, often wound up with the desire to find somewhere 'nice' to run. Imagine our feelings of despondancy on the Henning Kraggerud tour faced with a 26 story hotel on the outskirts of Mexico City overlooking a 16 lane highway and a shopping complex. On asking the concierge we were told about a country park, where he used to run, just behind the hotel. With thoughts of "yeah, right!" ringing in our heads we set off around the back streets in the early hours of the morning. At first light and only seven minutes run from the hotel we came across the most surprising mountain park complete with full compliment of athletes running around a specially created cinder track! Getting a little more adventurous the next morning we decided to get up early once more and this time brave the heights of the wooded mountain paths - we certainly had more excercise than we bargained for when we chose a path which we thought led back towards the hotel only to realise that the very familiar roller coaster we could see was only familiar because we had driven past it on our way to the concert hall at the University the night before! Incidently, the same university where the previous year Jo MacGregor and Britten Sinfonia players joined the local orchestra on the rooftop to dance Salsa before the performance!

I like to think that running (and dancing!) brings an extra feeling of energy, vitality and camaraderie to the performance and also gives us a sense of the audience to which we're playing, given that we understand a little more about the area and culture from which they came. We haven't graced the concert platform with our trainers yet, but if we do, you'll have to be the judge of whether we forgot to change or whether we just cut it a little bit too fine this time!