Rich strings and pulsating rhythms transcended the concert hall, serving as an exposition of the thought processes and sources of inspiration for one of today’s great living composers.

The pre-concert talk was a perfect introduction to the music of John Woolrich, for those who were not already familiar with his work. An engaging presentation, together with the help of the Britten Sinfonia Academy students performing two inspiring works, In the Mirrors of Asleep and Stealing a March, helped give an informative overview of the composer’s style, however it was unfortunate that the composer could not be in Cambridge for the pre-concert talk due to a sudden back injury. We wish him well in his recovery.

The introduction of Purcell and Wolf songs for soprano and strings and solo strings was sublime, with Woolrich’s arrangements of both coming to life in the hands of Britten Sinfonia. The string sound was beautiful, and the leadership of Thomas Gould was well-judged. Susanna Hurrell did an admirable job, standing in for Sophie Bevan at the last minute. Her voice was well-suited to the Purcell, and blended majestically with the orchestra.


The two arrangements provided the perfect backdrop for John Woolrich’s first work of the evening, Ulysses Awakens, an intriguingly named work featuring solo viola, performed with consummate skill by Clare Finnimore. The work featured harmonies identifiable with both the Purcell and the Wolf, however it brought an endearing modal feel, hinting at a folk-type sound. Both beautiful and lively, to the listener the work was a pleasure.

The first half closed with an admirable performance of Stravinsky’s Eight Miniatures, with Duncan Ward instructing the ensemble well, and with the composer’s ineffable sense of humour and rhythm pervading the work, so as to create a pleasing performance, and a spectacular Per pieta, non ricercate, by Mozart. Hurrell was again wonderful.

The second half could be seen as being perhaps more conventionally judged, with the lengthy first section contrasted with a relatively brief final period, including two works which functioned symbiotically, so as to create a cohesive performance. Stravinsky’s Dumbarton Oaks, a neo-classical favourite, was effervescent and sparkling in its wit, with engaging rhythms heightening interest. The audience seemed once again enthused, following their mid-concert snooze. The star of the show, however, was Woolrich’s Violin Concerto, a fabulous and endearing work, which was performed in style by Thomas Gould, under the fantastic leadership of Duncan Ward. Ward’s simple yet effective conducting - efficient is perhaps the word - suited the work beautifully, as he brought a clarity to the music that was much-needed. The violin enjoys much interplay with the orchestra in this interesting work, particularly with the marimba, which was well-judged.

The performance was well-received, and one cannot help but suggest that the applause given to the works of Woolrich was equal to that of the well-established repertoire, indicating the composer’s relevance today. A fitting celebration, and exploration, of the man, and the composer, as he turns sixty this year.

Kitty Whately will be the mezzo-soprano soloist in an upcoming performance of Bach's Magnificat (6 December 2014) in London's Barbican Hall. She will also be joining Britten Sinfonia abroad in the new year as one of the soloists in an Amsterdam performance of Haydn's Nelson Mass (February 2015).

Find out more about Kitty in this blog post as she reveals her biggest fears, guiltiest pleasures and what animal she would be...


What has been the highlight of your career so far?

That's a tough one. I have been so lucky over the past few years to get to work with some fantastic people in beautiful places. I think I'd say working in the Aix en Pravence festival last summer. It was a newly commissioned opera by Vasco Mendonça, for just two singers. It was directed by Katie Mitchell, and I found her rehearsal process fascinating. It was a great part, and I got on so well with everyone involved. We were rehearsing in a beautiful old chateau in sunny provence and the whole period was fab.

When are you happiest?
In my favourite place on earth, Aldeburgh, with my fiance Anthony and my 8 year old daughter, Ivy. Anthony and I are getting married there next year.

What is your greatest fear?
Losing the people I love.

What is your earliest musical memory?
Singing along to Paul Simon's Graceland, Katheryn Tickell the Northumbrian piper, and Salif Keïtar, an Afro-pop singer/songwriter from Mali and favourite of my dad's, on long car trips with my family.

Which living person do you most admire, and why?
Oh that's too hard. I'll say my family- I admire my fiance for his kindness and his calm, positive attitude to life, I admire my dad for his hard work ethic, and his well-earned reputation for being an incredibly lovely collegue and warm person, and my mum for her intellegence, her wit, and selflessness and generosity towards supporting her family, especially me.

What was your most embarrassing moment?
I can't think of any really. I must wipe them. I try to laugh at myself as often as possible so perhaps that helps me to not feel embarrassment? No, I really do. I just can't remember any.
What is your most treasured possession?
My daughter. Can I say that? If not, my pillow.

What would your super power be?
Hmm, if I could choose one? I would choose the power to click my fingers and arrive somewhere without travelling.

If you were an animal what would you be?
A pot-bellied pig. I love food, and I already have the pot belly.

What is your most unappealing habit?
Licking my plate after a delicious meal. I try not to do it in public, but my family have to put up with it at home. Waste not - want not.

What is your favourite book?
How To Be a Woman by Caitlin Moran.

What is your guiltiest pleasure?
Watching X Factor.

Who would you invite to your dream dinner party?
Jamie Oliver (to cook), Billy Connolly, Stephen Fry, Caitlin Moran, Jo Brand and Phil and Fern (Schofield and Cotton).

If you could go back in time, where would you go?
To the era of Jane Austin. I love all that. I'd only want to visit though. I wouldn't want to stay there for ever.
How do you relax away from the concert platform?
Cooking or watching cookery programmes with my fiance, and watching movies and eating popcorn with my daughter.

What do you consider your greatest achievement?
My daughter. Honestly, I know that's a cliche. But I really do. So often I look at her and I think "I made a human being in my body, and kept her alive! And she can walk and talk and everything!!"
What is the most important lesson life has taught you?
Happiness is a transitional state. You don't arrive at 'happiness' and live happily ever after. It comes and goes.

In a nutshell, what is your philosophy?
Enjoy the happy moments while they last, and keep strong in the unhappy ones. Remember they will pass.

Bach's Magnificat featuring Kitty Whately will be performed on Saturday 6 December 2014. More information can be found on our website.

Posted by Britten Sinfonia at 11:09 No comments: 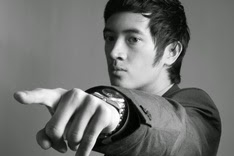 Composer Joey Roukens is writing a new work for Britten Sinfonia, which will be premiered on Wednesday 4 March 2015 in London's Wigmore Hall followed by performances in Cambridge and Norwich as part of our At Lunch 4 programme. Joey is one of the composers you can support through the Musically Gifted campaign. Find out more about Joey in this blog post as he answers questions about himself and his music...


How would you summarise yourself in one sentence?
I'm a composer with an eclectic (yet hopefully distinctive) musical language embracing the great diversity of styles and genres that make up our current musical age.

What’s your earliest musical memory?
Probably listening to my father’s vinyl records: mostly crooners, country and folk music. But I also remember a record of songs played by a Dutch street organist, which I was very fond of.

What do you like most about composing?
What I like most is when you stumble upon an idea that seems brilliant and you think this is going to be the masterpiece you’ve always wanted to write… only to realize the next day that the idea is not that brilliant after all and the piece you’re working on is definitely not going to be a masterpiece. For the most part, it’s not fun to compose: it’s an agony – 99% perspiration and 1% inspiration!

What inspires you?
Anything can be a source of inspiration – a good movie, a museum, a night club, etc. But what inspires me most is other music. When I hear music that really moves or excites me I get inspired to write my own.

When was the last time you experienced writers’ block, and how did you move on from it?
With each piece, I go through a stage of writers’ block, sometimes it lasts only a day, other times it can last many weeks or even months. Frustratingly, there’s not much you can do about it; it’s part of the creative process. What works best for me is to just accept it and take a break.

How do you feel about new music and what we’re trying to do with Musically Gifted?
In these times of arts cuts it is very important that projects such as Musically Gifted exist to make alternative financing of new music commissions possible. Musically Gifted is a wonderful initiative I can only applaud. New music that’s being written today must be performed today, for it has something to communicate to the audience of today.

What would you like to be recognised for?
Frankly, I don’t care. I just write the music I want to write and as long as there are listeners out there who think my music is worthwhile, I am happy.

What advice would you give to other composers?
I don’t think I’m in the position to advise other composers, but if I had to advise younger, aspiring composers, I’d say: Be open to the whole gamut of styles, genres and sources that the current musical culture has to offer. Embrace everything, question everything and write only what you want to write, even if you think you shouldn’t write it.

What’s your musical guilty pleasure?
I’ve got plenty: the lush film scores of John Williams and Morricone, Strauss waltzes, Bacharach songs, new agey ambient music, at times I can even enjoy a bit of Einaudi.

If you turned your iPod on now, what would be playing?
That could be anything from Renaissance vocal music to the new Aphex Twin album.
Favourite five tracks of all time?
That’s difficult to say because I have so many favourites, plus, they change all the time. So let me just give you my favourite composers. As of now, they are (in no particular order): Bach, Mahler, Mozart, Sibelius, Stravinsky.

The last concert you saw?
A concert with orchestral works by Dutch composers, including a piece by me, about a month ago.

If you hadn’t been a musician, what might have happened?
Either I would have become a researcher in cognitive psychology (in fact, I studied psychology at university, as well as music composition), or I would have ended up a tramp.

Which musical instrument do you wish you could play, and why?
The violin. Because of the enormous emotional range it is capable of expressing.

Is there anything else you want to share with the world?
No, enough said, just listen to my music!


Joey's new work will be premiered in March 2014 as part of our At Lunch 4 programme, which also features works by Lou Harrison and Shostakovich.

You can find out more about Joey's music by listening to some tracks on his website.
Posted by Britten Sinfonia at 16:13 No comments: