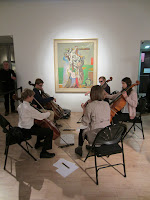 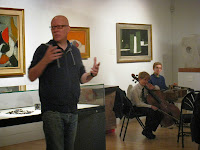 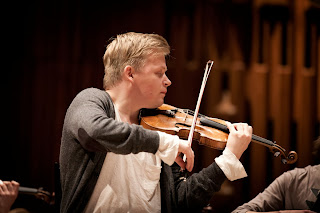 A 'Wacky' Piece - A Review from a SinfoniaStudent

Last week one of our Cambridge SinfoniaStudents, Rosie Ward, came along to our opening 2013-14 season concert in Cambridge and kindly wrote the following review;

‘What a wacky piece!’ I heard one audience member exclaim after Britten Sinfonia’s concert in Cambridge on Wednesday. The work we had just heard was not an avant-garde new commission; in fact, Haydn’s Symphony no. 60, ‘Il Distratto’, dates from 1774, making it the oldest piece in a programme that also included works by Stravinsky, Anna Clyne, Mozart and Nicholas Maw. This was a diverse selection not only in terms of chronology and style, but also because each work called for a different ensemble, from string quartet to full orchestra. The common thread running through the evening was the musicians’ chameleon-like flexibility, which made both the ensemble and the concert more than the sum of their parts.

Stravinsky’s Three pieces for string quartet (1914), which opened the programme, are just as worthy of the word ‘wacky’ as is the Haydn symphony. These brief, terse little pieces do not correspond in the slightest to the string quartet genre’s connotations of civilised Viennese classicism: as Paul Griffiths puts it, they are ‘determinedly not a “string quartet” but a set of pieces to be played by four strings.’ Rather than working either together or in opposition to one another, in the first two pieces the instruments seem to operate on completely separate rhythmic or harmonic planes.

In terms of tempo and texture, if not in terms of emotional atmosphere, the third and final piece in Stravinsky’s set provided something of a bridge to the next piece on the programme. Anna Clyne’s Within Her Arms (2008/9) is an elegy for fifteen stringed instruments written following the death of her mother. The wide spectrum of subtly changing sound qualities that Clyne creates, particularly enhanced by the centrally positioned double basses, was what made both the composition and this performance special. The instruments’ lines interweave and combine in a hypnotic rise and fall, so that the piece hovers in a fragile balance between an atmosphere of still contemplation and fluid movement.

The ensemble on stage grew again for the final piece of the first half, Mozart’s Piano Concerto no. 12 in A major, K414, with soloist Paul Lewis. The subtle phrasing and timing (there were some perfectly judged, or instinctively allowed, moments of silence), and the balanced interaction both between orchestra and soloist and within the orchestra, combined to make this a beautifully integrated, smooth, but nevertheless dramatic performance. As if the strength of this collaboration was not clear enough from the music itself, it was highlighted during the applause by a light-hearted disagreement between Paul Lewis and leader Jacqueline Shave, each of whom seemed to think the other more deserving of the audience’s enthusiastic response.

The second half began with oboist Nicholas Daniel taking centre stage in Nicholas Maw’s Little Concert (1988), accompanied by the string section and two horns. According to the composer, a defining characteristic of the work is its ‘concentration on line – the presentation and development of melody, the acceptance of the primacy of song,’ and Nicholas Daniel certainly did sing. This was captivating playing from the slow bloom of his first note to the elegantly light, virtuosic ending.

The musicians visibly delighted in performing their final party piece – the ‘wacky’ Haydn symphony. Whilst they relished the work’s quirks and surprises of form, this did not come at the expense of beautiful balance and texture: in the presto fourth movement, for example, although much of it is marked forte, the whole orchestra played with the lightness and tightness of a small chamber group, and the finale was no less joyous, whether for the orchestra or the audience: a high-spirited send-off to an exciting and diverse but always excellent concert.

There is still a chance to hear this programme in the opening concert of our Norwich 2013-14 season (with pianist soloist Dejan Lazic) - further details.

Posted by Britten Sinfonia at 11:52 No comments: