Songs of No Man's Land

Britten Sinfonia’s Creative Learning team are currently working on Songs of No Man’s Land – a series of family and schools concerts celebrating the centenary of World War I. The schools concerts are now all sold out in Norwich, Peterborough and London, with over 1500 children attending – but there are still tickets available for our Family concerts, this Saturday 1st February at West Road Concert Hall, Cambridge.

The concert is based on a fantastic true story called War Game by author and illustrator Michael Foreman. I recommend the book to you, for 7-11 year olds, and their parents. It’s beautifully illustrated and includes lots of real facts, original propaganda and images from the period. The book tells the story of Michael Foreman’s Uncles; William, Frederick,  Billy and Lacy  all of whom died fighting in the Great War, when they were just young men, aged 18 – 24.

In our concert, the Great War is explored from a personal angle - we are placed in the shoes of the four young lads from Suffolk; passionate about football and naively ready to sign up ‘for an adventure’. The story tells us about Christmas in the trenches. It feels funny discussing these events in January, when we’re all sick of Christmas, but the young audience and performers share a poignant moment singing Christmas carols in English and German, and imagining what it would have felt like to be far from home, cold, hungry and scared at Christmas time. We also explore keeping rats as pets, trench foot and eating lice – uurrrrgggh! As well as the carols, the young men shared a game of football in no-man’s land and we hear about this, accompanied by exciting new music composed by Tim Watts. The music and action capture young imaginations and we imagine the pride our heroes felt, playing for ENGLAND!  Finally, the concert depicts the four young men being sent over the top, and gunned down by the opposition.

The children in the audience understand how our hero, Will, died and that lots of people died, but I wonder if any of us can really comprehend the massive loss of life that took place at that time. By the end of the war, over 9 million soldiers had been killed, and another 21 million wounded. Over a million soldiers were killed in the infamous Battle of the Somme alone, including about 30,000 in just one day. Its bigger, and sadder than we adults can get our heads around. Although the children in the audience understand the concept of War, and that people die – in an abstract senses, the real thoughts of loss and the numbers of young men who died, on both sides are incomprehensible to the age group.

I believe our concert explores the war in a sensitive and delicate way, and will hopefully encourage questions and further thought about the reality of war but won’t leave children overwhelmingly sad or confused. It is so important, as we mark 100 years since the start of the first World War, that we continue to remember those who lost their lives, and we have a duty to pass on knowledge of the events of WWI to the next generation.

Click here to find out more about the concert, learn the songs and book tickets. 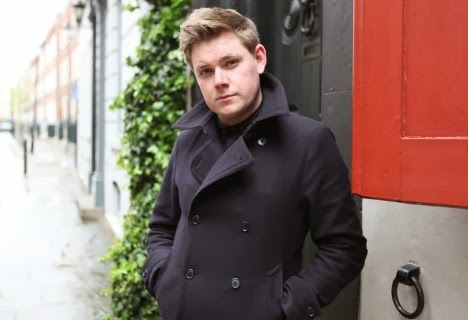 Britten Sinfonia will premiere Mark Simpson's new work, Geysir in February. Through the Musically Gifted scheme you can help support Mark's new work - donations close at 5pm on Friday 31st January. Mark won both the BBC Young Musician of the Year and BBC Proms/Guardian Young Composer of the Year  in 2006. Since then he has been commissioned and had his works premiered by ensembles including the BBC Symphony Orchestra, Aronowitz Ensemble and the Royal Liverpool Philharmonic Orchestra.  We asked Mark a few questions about himself and his inspirations;

How would you summarise yourself in one sentence?
Passionate, ambitious, a dreamer, full of energy, wanting to be moved, wanting to move people, inspire people, be inspired by people, a perfectionist, constantly searching for those rare musical moments when time seems to stop.

What do you like most about music and composing?
The duality between the head and the heart, which for me as an emotional person who enjoys thinking, is the perfect match. Music encompasses everything. I can experience things that I would not have otherwise have been exposed to, ideas about philosophy, literature, poetry, biology, language, politics, physics, art, psychology. But I also FEEL music coursing through my body. The greatest pieces of music stimulate a part of my brain in way that is both exciting and hyper-emotional.

What inspires you?
Great literature, great poetry and art, things that move me, people who awaken a passion within me and share the intense passion I have.

How do you feel about new music and what we’re trying to do with Musically Gifted?
I feel a lot of things about 'New Music'. That question is quite broad and possibly too big for discussion within this short interview. But what I would like is for young composers (I'm including myself in this!) to be more daring. Embrace the future of our art form and do something amazing with it. Influences are hard to shake off, but when we reach for ideas that seem impossible, great art happens!

What was your reaction when Britten Sinfonia commissioned you?
I was honoured. It will be such a privilege to work with musicians that I've looked up to since I was a teenager starting out.

What would you like to be recognised for?
Writing great music, inspiring as many people as possible and bringing classical music to as wide an audience as possible without ever patronising them or distilling the great art form we have.

What’s your musical guilty pleasure?
I'm not sure I like the idea of a 'guilty pleasure'. It presupposes a hierarchy of style with classical at the top which I don't necessarily buy into.  I like listening to things that aren't classical, as much as I listen to 'classical' music, as long as it's good: the music of Jason Robert Brown, Beyoncé, 80's music, folk music, German indie bands, house and techno music, Indonesian funeral music. There's nothing I'm really embarrassed to say I listen to, because I wouldn't listen to it if it wasn't worthwhile!!

At the end of a long day, how do you relax?
A quiet drink with friends, in a local pub, in bed before midnight.

If you hadn’t been a musician, what might have happened?
I probably would have done something with Art or German. I had two very inspiring teachers in both subjects at High School who awoke a real passion for both.

Is there anything else you want to share with the world?
I have been a question on The Weakest Link and University Challenge, and once appeared in an episode of Grange Hill!

You can support Mark Simpson's new commission through Musically Gifted. Donations must be received by 5pm Friday 31st January. Click here for more info.
Posted by Britten Sinfonia at 11:10 No comments: 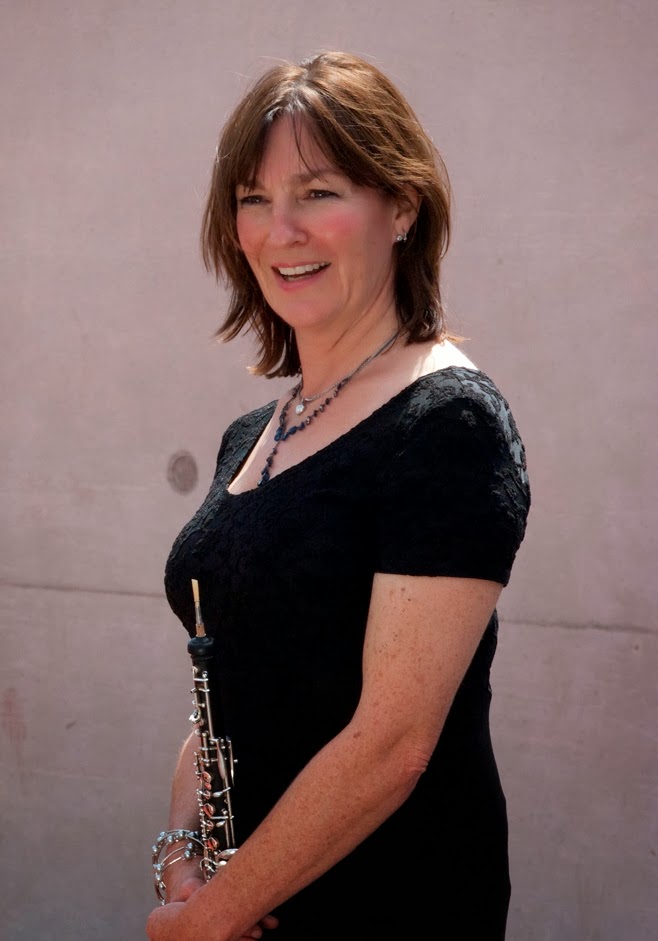 This February Britten Sinfonia oboist, Emma Feilding  performs alongside the orchestras wind players and regular collaborator, Imogen Cooper in a concert featuring Mozart's towering masterpiece, the Gran Partita and Beethoven's Quintet for Piano and Winds in E flat. She took some time out from her busy schedule to answer a few questions;

What has been the highlight of your career so far?
There have been so many Britten Sinfonia concerts that have been highlights for me but I remember the first time I played at the Wigmore Hall with the Guildhall strings and Nicholas Daniel as being particularly memorable as my beloved granny was there waving her handkerchief at me. Working with the theatre company Punch Drunk and performing Mozart’s wind serenade with the Haffners are also favourite highlights.

When are you happiest?
Pure happiness can strike at any time and with anyone but giggling in the bath with my 5 year old daughter never fails to bring it on.

What is your greatest fear?
Heights

What is your earliest musical memory?
Spinning around on my granny’s piano stool aged about 5.

Which living person do you most admire, and why?
My daughter, for her ability to live so completely in the moment, and her carefree passionate nature.

What was your most embarrassing moment?
Fainting during a recital at the Royal Academy of Music!

What is your most treasured possession?
Two pictures- one of my grandmother’s house in Norfolk where I was so happy as a child, and another painted by a good friend.

If you were an animal what would you be?
I Like to think it would be a tiger or something dynamic,but think a sloth is probably more realistic.

What is your most unappealing habit?
Interrupting people when they are speaking.

What is your favourite book?
I love reading and could never choose a favourite but J.D Salinger’s short stories, For Esme – with love and squalor,  are just heartbreaking.

What is your guiltiest pleasure?
My tendency to watch rubbish television, is a bit embarrassing but I don’t think I
feel guilty about any pleasure.

Who would you invite to your dream dinner party?
Me, Woody Allen and Gerard Depardieu would be fun for me, oh and someone to
cook!

If you could go back in time, where would you go?
A particularly glorious childhood summer in Norfolk in the 1970s spent riding and sailing.

How do you relax away from the concert platform?
Like most people I imagine, laughing with friends, watching films, playing with my daughter, reading and practising yoga.

What do you consider your greatest achievement?
Returning to playing the oboe after nearly 9 years not playing at all and producing my gorgeous daughter.

What is the most important lesson life has taught you?
The bad times never last.

In a nutshell, what is your philosophy?
You are never too old to dance and ‘a messy house is better than a life unlived’.


Posted by Britten Sinfonia at 09:46 No comments: