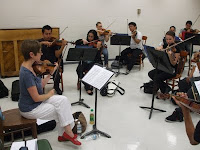 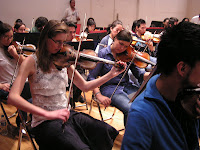 Ali Read in the full rehearsal

We've just got back from two extra days in Mexico working with the Carlos Chavez Youth Orchestra. While the rest of the orchestra spent Monday evening at the airport, I [Ali Reid] went with Judith Kelly (violin) and Bridget Carey (viola) to a hotel on the other side of Mexico City to meet with teachers from the youth orchestra.

We had a fascinating discussion hearing about the project which was founded twenty years ago: two orchestras of the best young musicians in Mexico form a school that the students attend daily. Their orchestral work is complemented by individual tuition from some of Mexico's top professionals as well as more wide-ranging lessons including Alexander Technique and movement classes with a dancer. Having told us about their work the teachers were keen to hear about the British system. We also discussed the difficulties facing music education on opposing sides of the world: some problems are the same everywhere, but they have unique challenges to face and were keen to hear our views.

It was inspiring to meet such a fascinating group of teachers together with the visionary Julio at their helm, and it helped to prepare us for the two days ahead.

Early the following morning we departed the hotel for sectionals with the violins and violas. We spent 3 hours with them (and a translator of course!) putting them through their paces with Britten's Sinfonia da Requiem and Tchaikovsky's Fifth Symphony. They were enthusiastic and really receptive: they have two concerts at the end of the week so were keen to work hard together before the afternoon's full rehearsal.

Having finished the morning we all piled onto two buses to go to the full rehearsal - packed lunches on the way! We arrived at a vast complex for the Arts in another part of the city. Not only is it home to a concert hall, but there's also a theatre, art gallery and dance studio just around the corner! This was the first meeting of the orchestra with their conductor for the week (Kenneth Jean) and he played through all of the programme, which also included a new Spanish work. We sat within the sections which was really useful: we could give some help as well as see how things felt in the thick of things!

The following day was a similar pattern of morning sectionals then full rehearsal. I think the three of us found this day even more productive. Having got to know the students and their playing we progressed quickly, and the full rehearsal that afternoon already sounded like a different orchestra. Sadly we had to dash to the airport straight from the hall, so won't have a chance to hear how they change towards the concerts. But we had crammed a lot into two days!

Before leaving we had several good chats with the students, who were also keen to hear all about musical life in England - we will hopefully keep in touch through the wonders of email! They are a really exciting group and the whole project is doing amazing things for the future of classical music in Mexico. An inspiring few days!

Our Creative Learning work in Mexico was generously supported by Cambridge University Press, our International Partner.
Posted by Britten Sinfonia at 11:14