Sinfonia Students Carl and Simone share their perspectives on our At Lunch 1 programme (in rehearsal and in concert), performed in West Road Concert Hall, Cambridge, on Tuesday 2 December 2014.

Britten Sinfonia Wind Quintet At Lunch: A behind the scenes experience 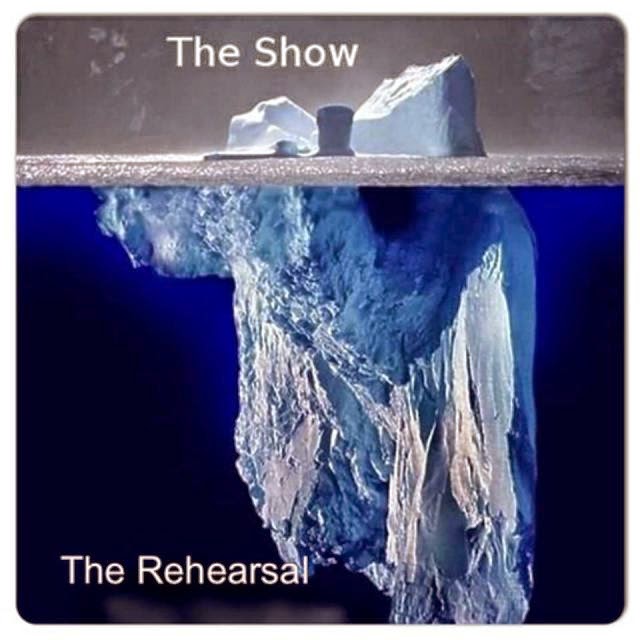 I enjoy the concert experience - sitting down and watching one or more musicians perform with polish and flair. It is well known that performers spend enormous amounts of time in the practice room, yet the audience will never know any of that build up; a concept conveyed perfectly by this picture of an iceberg. As a performer myself, I have always been intrigued with knowing what went on before the concert. How do professional musicians prepare their performances?

I recently had a rare opportunity to listen in on a pre-concert rehearsal by the Britten Sinfonia wind quintet. Sitting very quietly in the top seats of the West Road Concert Hall, I listened for an hour.

The first thing to strike me was the different seating formation of the quintet. Compared to a string quartet, wind quintets allow more flexibility in regards to where the players sit. In my own experience, the following arrangement was common: (from left to right) flute, oboe, bassoon, horn, clarinet. The Britten Sinfonia players sat: bassoon, clarinet, flute, oboe, horn. Never experiencing such a formation, I was unsure how effective the overall sound would be. I was quickly won over. The bassoon and horn created a ‘surround sound’ bass line coming from left and right, of which the block of three treble instruments projected over the top. By the time the sound reached the audience, it was a perfect blend.

The quintet members did not rehearse every single piece from beginning to end - which I assume was simply not necessary, and they wanted to preserve energy for the concert. Their playing was interspersed with lively, humorous chatter and old stories of concert disasters. The group was clearly more than just five musicians performing a quintet recital; they seemed genuine friends. The issue of leadership in chamber music can often be a challenge, however the members all took turns at directing the flow of the rehearsal.

The four recurring focuses of their repertoire during the rehearsal were: communication (particularly who was showing the beat and leading in the other players), tuning chords, keeping a consistent tempo, and negotiating more effective places to breathe. As a student, it is reassuring to know that professional musicians also have to continue developing these challenging areas of chamber music.

My ‘behind the scenes’ experience ended as I quietly exited the rehearsal while the quintet had a break between pieces. I began to wonder how hearing the rehearsal would affect my experience of the concert. Though, as soon as the quintet sat down to perform, the events of the rehearsal moved to the back of my mind and I was overtaken by the wonderful blend of timbres.

The wind quintet comprised from leading members of the Britten Sinfonia dazzled Cambridge with its virtuosity and musicianship, in bringing to life three contemporary works, and one more staple piece of repertoire.

Berkeley’s Re-Inventions and Seeger’s Suite for wind quintet were both lively, with the former offering a contemplative approach to the well known Bach repertoire, and Seeger’s exciting work showing the full breadth of wind quintet capabilities.

However, the lunchtime concert really came to life with the OPUS2014 winner, Patrick John Jones’s Uncanny Vale, a new work for wind quintet, which explored harmonic and timbral possibilities in a pioneering way. Creating a strange, eerie atmosphere, the work was altogether more expressive than Berkeley or Seeger, and really captured the audience’s imagination, exploring ideas of fantasy and the mind.

Nielsen’s famed wind quintet is a more familiar work in this size of ensemble, and offered the composer’s unique sonority and handling of tonality. The players from Britten Sinfonia worked well to produce a clean sound, resulting in a poised, elegant but nonetheless vivacious account of the Danish composer’s great work.

Posted by Britten Sinfonia at 16:54