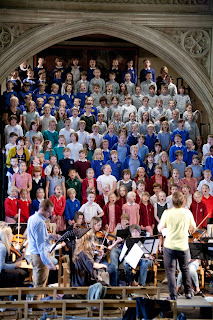 On the 26th June, 150 primary schools children from the area around Wymondham, Norfolk came together to perform a concert. It wasn’t a normal school concert however; the children were performing their own compositions, accompanied by a professional orchestra - string players from Britten Sinfonia alongside amazing professional soloists Robin Tritschler (tenor) and Stephen Bell (horn).

The concert was called Serenade, and was a celebration of the music of Benjamin Britten who came from the east of England, and who’s centenary year we’re currently celebrating. The professional musicians performed Benjamin Britten’s famous Serenade for Tenor, Horn and Strings, but in between the movements of Britten’s songs, the children performed their compositions. Both Britten and the children were inspired by the theme of night time.

Students from  Barnham Broom, Barford, Spooner Row, Tacolneston, Wreningham and Mattishall schools certainly did themselves proud. Benjamin Britten used poems by famous poets such as Blake, Keats and Tennyson, but the children wrote their own lyrics as well as the music! One carried you away to a far away Dreamland, where "a dim light hypnotyses me". The Sky at Night talked about the stars and galaxies explode like "an eyeball staring into the darkness!" There was also a scary bone rattling song about nightmares, where "boneless hands reach into my mind!"  and featuring the catchy chorus lines "I was zombified!" The concert also featured an interlude, composed by A-level music students from Wymondham College and High School based on the poem Tiger, Tiger by William Blake, performed by the orchestra and Robin Tritschler.

The concert was performed at Wymondham Abbey, which is a beautiful old building, and was part of Wymondham Arts Festival. To fit all the children in, and so everyone could see properly we had to build a massive stage that was over 3 meters tall! The concerts were so popular that we had to perform it twice, at 6pm and 8pm. Both shows sold out, and although it was a long evening for the younger children, it was great fun, and very well received.  Back in the office, we’re now doing the most satisfying bit – reading the children’s feedback sheets, and writing the project evaluation. A big thank you to our fabulous music leaders and composers, John Barber and James Redwood. To our wonderful soloists, orchestra and workshop team – but the biggest thank you is to the teachers, for all their hard work, and to South Norfolk Council and Orchestras Live for funding the project.

You can hear the children’s songs here and see some photos of the event here.

There is another opportunity to hear the children's songs in a pre-concert event at Norwich Theatre Royal on Sunday 17 November 2013 - more details here
Posted by Britten Sinfonia at 14:25