Antony and the Johnsons - A Review 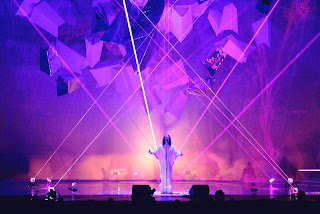 Last Thursday I was thrilled to have the chance to watch Britten Sinfonia perform Swanlights at the Royal Opera House with Antony and the Johnsons. The orchestra have a long running relationship with the Royal Opera House, having previously performed with Rufus Wainwright and most recently a fully staged performance of Gerald Barry’s The Importance of Being Earnest in the Linbury Studio.

Antony Hegarty, who originally hails from England, but moved to New York City in 1990 has released four albums and was awarded the Mercury prize in 2005 for I am a Bird Now which featured guest appearances from artists Boy George, Lou Reed, Rufus Wainwright and Devendra Banhart.

But Antony is as much of a visual artist as he is a musician. Originally commissioned by New York’s Museum of Modern Art (MoMA) and first performed in January 2012, Swanlights is a performance piece with dazzling light installations, featuring Antony’s poignant songs which talk about his views on gender, relationships and spirituality.

Swanlights begins with a brief dance piece. A feminine but strong figure emerges, dressed as a swan and stands just in front of the footlights, flapping her wings frantically. The first number is then accompanied by a green light, delving into the layers of mist and curtains, whilst Antony’s quivering yet serene voice dominates the auditorium.

By the third or fourth number, the layers have gradually been peeled back to reveal the angelic Antony, swaddled in white cloth. As we move through each song in the performance, we are immersed in a new lighting design, all the while the vulnerable looking singer drifting across the stage under an enormous, metallic, cloud-like structure.

Particularly memorable were songs The Cripple and the Starfish and the title song Swanlights. Also included was a very interesting cover of Beyonce’s Crazy in Love, much more insular and mournful than the original, but true to Antony’s style.

The final reveal moment occurs when a thick screen is lifted mid-song and Britten Sinfonia, with almost fifty musicians in total (which is a large ensemble for us) is on full view, conducted by Rob Moose, a long-term collaborator of Antony’s.

After a standing ovation, Antony finally addresses the audience. “It was really a dream to bring this to London”, he announces. His encore finishes with Salt Silver Oxygen, a slightly more up-tempo and jovial song which he tells us he worked on with Nico Muhly. In Friday night’s show he was also joined in the encore by Boy George.

Once I settled into the somewhat bizarre landscape on stage and my ears acclimatised to Antony’s peculiar and distinctive voice, I thoroughly enjoyed the performance. Swanlights is a completely otherworldly performance, full of emotion and expression and something I would gladly see again.

Antony and the Johnsons’ website www.antonyandthejohnsons.com
Read the reviews of this performance in the national press here.